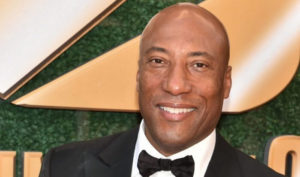 Comedian, entertainment, and media mogul Byron Allen will soon join the giants of Hollywood when he is honored with a prestigious star on the Hollywood Walk of Fame.

The Hollywood Chamber of Commerce has announced that it will honor Allen with the 2,706th star on the Hollywood Walk of Fame on Wednesday, October 20, 2021, at 11:30 A.M. PDT. The placement of Allen’s star will be dedicated at 1749 Vine Street,.

“Byron Allen has show business in his blood! His impressive career started as a young boy and just kept going. We are very proud to be able to pay tribute to Mr. Allen’s stellar career and add his name to our iconic Hollywood Walk of Fame,” said Ana Martinez, Producer of the Hollywood Walk of Fame in a written statement.

The Hollywood Chamber of Commerce encourages those who are unable to attend the ceremony and fans from all around the world to watch the event exclusively on the website of the Hollywood Walk of Fame.

The honorees included stars of Motion Pictures, Television, Live Theatre/Live Performance, Radio, Recording, and the newest category Sports Entertainment. They were chosen by the Walk of Fame Selection Panel of the Hollywood Chamber of Commerce. The entertainment professionals who will be honored were picked from a vast amount of nominations to the committee and were selected at a meeting that was held on June 14, 2021. The people chosen to receive stars were ratified by the Hollywood Chamber’s Board of Directors on June 16, 2021.  Ellen K, Chair of the Walk of Fame Selection Panel and Radio personality, announced the new honorees on www.walkoffame.com.

Allen is the Founder, Chairman, and CEO of Allen Media Group/Entertainment Studios who was born in Detroit, Michigan.

In addition to just acquiring additional seven television stations this past April, along with the Weather Channel, the Allen Media Group owns a syndicated company and 16 power four (ABC-NBC-CBS-FOX) affiliate broadcast stations. Allen’s 24-hour networks include Comedy.TV, Recipe.TV, and JusticeCentral.TV.

6 (Totally Wrong) Ways We've Had Money Mansplained to Us

Ghanaian-British Entrepreneur Creates Earbuds That Can Translate Over 35 Languages