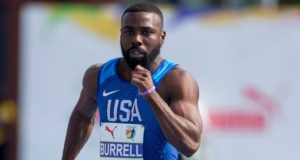 Last week, BLACK ENTERPRISE reported that Cameron Burrell, a former University of Houston champion sprinter and the son of Olympic gold medal winners Leroy Burrell and Michelle Finn-Burrell, died last Monday at the age of 26. Now the cause of his death has been released.

According to The Associated Press, a medical examiner’s office announced last Friday that the death of former NCAA national champion sprinter Cameron Burrell has been ruled a suicide. The 26-year-old Burrell passed away from a “gunshot wound of the head,” according to the Harris County Institute of Forensic Sciences. He was found dead in a Houston parking garage.

Leroy Burrell, Cameron’s father and a former Olympic gold medal sprinter who coaches Houston’s track team, made a statement pertaining to his son’s death on Friday. “We may never know why Cameron made such a decision. We encourage anyone who may be struggling in their lives to reach out for help. You are not alone, and you are surrounded by more people who love and care for you than you may think in a dark moment.”

Last week, the University of Houston, where Olympian Leroy Burrell works as the head track coach, had announced the shocking news online.

“We are devastated by the unexpected passing of alumnus Cameron Burrell. We offer our sincerest condolences and support to the Burrell family and all who knew him, including Cameron’s many friends, coaches, and teammates.”

We are devastated by the unexpected passing of alumnus Cameron Burrell. We offer our sincerest condolences and support to the Burrell family and all who knew him, including Cameron’s many friends, coaches and teammates. pic.twitter.com/Wnjb12knIh

Leroy was a member of the winning 4×100 relay team with Michael Marsh, Dennis Mitchell, and Carl Lewis that set a world record time of 37.40 seconds. His wife, Michelle, also won a gold medal in the women’s 4×100 relay that summer.