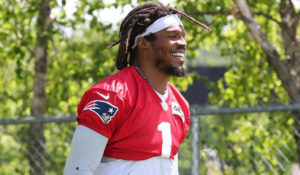 There will be no quarterback controversy in New England this NFL season as the coach of the Patriots has decided to release last year’s starting quarterback, Cam Newton.

According to ESPN, the New England Patriots have released veteran quarterback Cam Newton making room to start the rookie quarterback the team drafted earlier this year, Mac Jones. Patriots’ coach Bill Belichick stated initially in the preseason that Newton would be the team’s starting quarterback unless someone else played better than him and that seemed to be the case with Belichick choosing to go with the rookie.

The Patriots released Cam Newton, meaning rookie Mac Jones will be their starting QB, as first reported by The Boston Globe and confirmed by @adamschefter. pic.twitter.com/17648wkJ7S

Even with the coach selecting Jones as the opening day starter, no one anticipated that Belichick would cut Newton, who was also the team captain.

“I really appreciate all the love and support during this time but I must say … please don’t feel sorry for me. I’m good.”

There was ongoing speculation from the media that his release was due to Newton’s vaccination status. The quarterback was away from the team last week for five days because the team stated he was involved in a COVID-19 protocol “misunderstanding.” He had missed three practices over that stretch, which gave Jones the opportunity to earn the spot for the starting position.

Coach Belichick stated this to reporters “I would just point out that I don’t know what the number is, but the number of players, coaches, and staff members that have been infected by COVID in this training camp — who have been vaccinated — is a pretty high number. So I wouldn’t lose sight of that.”