After a tragedy took place on the movie set where Alec Baldwin fired a prop gun that fatally took the life of cinematographer Halyna Hutchins, many people sent condolences for all involved.

Conservative pundit, Candace Owens. however, took the opportunity to lambast Baldwin because he was a constant critic of Donald Trump.

According to Daily Mail, Owens, in since-deleted tweets, attacked Baldwin and stated that the accidental shooting was “poetic justice” for the 4 years that Baldwin spent criticizing the former president of the United States.

In one of her Twitter rants, she wrote: “Alec Baldwin spent 4 years dedicated to painting Donald Trump and his supporters as evil murderers. What has happened to Alec would be an example of poetic justice if it weren’t for the actual innocent people that were murdered by him. Pray for their families. So sad.”

She then wrote: “Will correct that last tweet to say Alec Baldwin *killed* someone- not murdered someone, as murder carries a different legal definition. Literally not one single thing that Alec Baldwin has said about Donald Trump and his supporters is going to age well.” 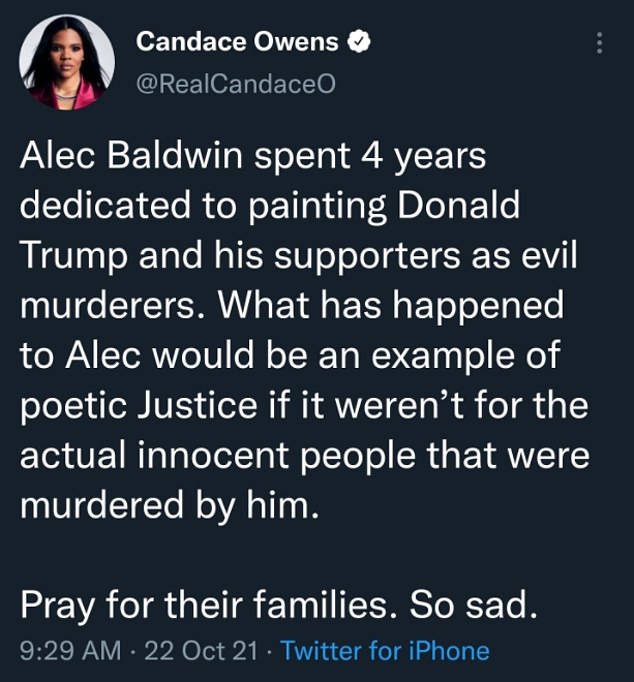 Several users responded in disgust to the words Owens posted.

Candace Owens is pure trash. Saying it’s “poetic justice” that innocent people died because Alec Baldwin didn’t like trump?! She is such a disgusting human being.

Candace Owens thinks a young mother’s death is “poetic justice” because Alec Baldwin has been mean to Trump.

There is no bottom. This is just depravity. Inhumane, inexcusable cruelty.

Candace Owens is pure trash. Saying it’s “poetic justice” that innocent people died because Alec Baldwin didn’t like trump?! She is such a disgusting human being.

Y’all….Candace Owens real deal just called the Alec Baldwin situation & the death of innocent set worker “poetic Justice” bc he criticized trump in the past…. That’s sickness. A whole human being died

Candace Owens is a terrible person, which is one of the two reasons she’s popular among her supporters. The other is that she provides cover. https://t.co/LwL1R6rSLZ

Just no type of sympathy for the woman who lost her life. At all.

The Daily Mail also reported that Baldwin’s daughter, Ireland Baldwin has also slammed Owens for being disrespectful towards her father.

‘You are the most disgusting, hateful, cancerous human being I’ve ever come across,’ the 26-year-old model wrote on her Instagram Story.

Black Man Calls Out Racism Before Getting Longest Sentence In Jan. 6 Insurrection Cases