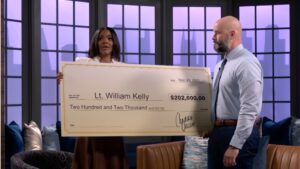 Candace Owens presented fired Norfolk Police Lt. Bill Kelly with a check for $202,000 last week, after a fundraiser she had set up for him more than doubled its initial goal.

The conservative pundit first voiced her support for Kelly with a Twitter rant on Nov. 20. According to Newsweek, Owens stated that she felt that Kelly did nothing wrong when he contributed $25 to Kyle Rittenhouse‘s defense fund.

“All police officers have a right to privately support issues and causes they care about in their off-duty time,” she wrote on the Give Send Go page she created for Kelly. “In this particular circumstance, Lt. Kelly was supporting the truth. Kyle Rittenhouse is innocent. So is Lieutenant Kelly.”

The Norfolk Police Department had terminated his employment in April for being one of several members of law enforcement whose anonymous donations to Rittenhouse were revealed in an article by The Guardian. When it was revealed that Kelly had made his contributions using his work email address, he was originally put on administrative leave, 13 News Now reports.

The city manager later made the recommendation that he should be terminated.

Within two days of making her announcement, Owens welcomed Kelly onto her show on The Daily Wire to present him for a check for the funds collected, which were double her $100,000 goal. She told him at the time that the donations had already exceeded $240,000 by the time the show went to air.

“I’m so grateful for our police officers,” she said while presenting Kelly with the check on a recent episode of Candace. “This just makes me so happy. It’s more money than we expected. Thank you so much to you for standing up for truth. We hope you get reinstated and I hope you sue the city for what they did to you.”

Since Rittenhouse was cleared of all the charges related to his shooting of three individuals during protests in Kenosha, Wi. last year, Kelly and his attorney have requested to have his job with Norfolk PD reinstated.

NFT art will never be mass-market — NFT licenses may be