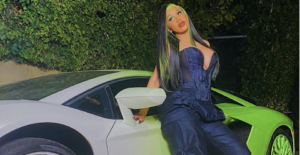 Cardi B was seen outside a Miami club going to bat for some Black women waiting to get inside after they complained security was allowing white girls in while they had to wait on the wayside.

According to the Daily Beast, the only female rapper with multiple diamond plaques was heading into the popular Miami hotspot, E11EVEN, with her husband, Offset of the rap group Migos. As they headed to the door, a Black woman called out to Cardi B and informed her that the guards weren’t letting any Black women into the club. Instead, the men were only allowing white women into the venue.

The entertainer was probably celebrating her new role as Playboy’s first-ever Creative Director In Residence, as reported by the New York Daily News last week. According to the newspaper, Cardi will launch an Only Fans-styled platform called CENTERFOLD. She will provide artistic direction across co-branded fashion and sexual wellness merchandise collections and digital editorial.

Another cause for celebration may have been the announcement by the Bronx-bred rapper via her Twitter account that she had earned yet another diamond record (10 million records sold) through her collaboration with the popular group Maroon 5.

This feat makes her the first female rapper to have more than one diamond record. Bodak Yellow, off her debut album, was her first. Girls Like You, which was recently certified diamond, is the record that placed Cardi B in the history books!