The project is located in Punta Pite, a community that sits between the beach towns of Zapallar and Papudo on the Chilean coast. As indicated by its name – punta is Spanish for tip – the site juts out into the sea.

Santiago firms Gubbins Polidura Arquitectos and Más Arquitectos were tasked with designing a second home for a couple with three children.

Their design was heavily influenced by the client’s unique property, which is almost 100 metres long and has a steep, rocky drop of 20 metres.

“One of the main objectives of the project was to create a horizontal plane – a large podium that allows for habitation and highlights the strength of the landscape, the view of the sea and the sunset,” the team said.

The two-level Casa S consists of a V-shaped, concrete podium topped with a glazed, amoeba-shaped volume.

The podium is embedded in the site, making it barely visible from certain vantage points.

“This reduces the image of a large house in the landscape,” the team said. “When you are in the pavilion on the upper floor, the rest of the house disappears.”

Within the 420-square-metre dwelling, there is a clear division between public and private areas.

“The idea of the proposal was to separate the public and private programs into two pieces arranged one on top of the other, relating both levels to the landscape,” the team said. 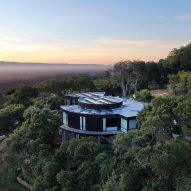 Upstairs one finds the kitchen, dining area and living room. Each occupies a circular room with a sunken central portion.

At the heart of the ground level is a spiral staircase, which leads down to the sleeping area. One side holds a main suite, while the other encompasses three bedrooms.

Throughout the home, the team used a restrained palette of materials, including stone, wood and board-formed concrete. Stacked plywood boards form the stairs and dining furniture.

Given Chile’s high amount of seismic activity, the architects were mindful of earthquakes while designing the building. The upper portion consists of a concrete slab that rests on 21 steel columns.

“The height of the columns is the minimum, 230 centimetres, thus avoiding the possible deformation of the structure in the face of dynamic stress,” the team said.

“This height enhances the horizontality of the enclosures, highlighting the views always towards the horizon.”

Other coastal dwellings in Chile include a pair of minimalist, timber-clad cabins by Croxatto and Opazo Architects, and a cliffside retreat by the late Chilean architect Cristián Boza that features a winding yellow wall and circular swimming pool.

The photography is by Cristobal Palma.