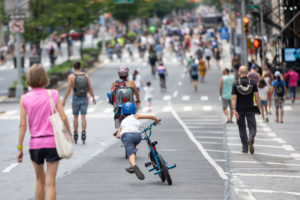 Experts predict the 2020 census will show a decline in the white population for the first time in U.S. history and that the under 18 population is likely to be majority non-white.

For the first time, the percentage of the white population could fall below 60%. According to The Washington Post, both benchmarks weren’t expected for another decade.

“Twenty years ago, if you told people this was going to be the case, they wouldn’t have believed you,” William Frey, a demographer at the Brookings Institution, told the Post. “The country is changing dramatically.”

Frey added if the census data confirms the decline of the white population in America, the benchmark will have come about eight years earlier than expected.

Annual updates of the 2010 census estimated the country’s white population shrinking, and all population growth comes from minorities. The new census data, which will be released this week, will show how neighborhoods’ ethnic, racial, and voting-age populations have changed over the last decade. The data is typically used to redraw polling districts for the next decade.

The Hill reports the actual numbers may be more drastic than it seems, considering the Trump administration stopped the census count earlier than expected. Early indications show an undercount of Latinos, as they’re reluctant to fill out their forms due to fear of Immigration and Customs Enforcement. Indigenous populations are also often undercounted and racial and ethnic groups that are not listed on the census form.

Some population analysts predicted the population would grow due to the pandemic and being indoors for the better part of 2020. However, the birth rate for 2020 fell below 2019. That can also be blamed on the pandemic as millions lost their jobs and, instead of creating another mouth to feed, were worried about feeding themselves, if they would be able to stay in their homes, and when the next stimulus payment would come.

In April, the Post reported the 2020 census showed the country’s slowest population growth since the 1930s at 7.4%. States in the South and West have grown the most as they’ve seen an influx of people from other countries and states. Estimates from 2016 through 2020 show people of color are responsible for all of the country’s population increases.