Danish studio CF Møller Architects has nestled a concrete villa into a shallow hill on a Norwegian farm, creating a pair of stepped terraces with views of the nearby Oslofjord.

Called Villa Aa, the building was designed for the family that owns the farm, who wanted a modern home and office while still respecting the nature and protected status of the site.

CF Møller Architects responded by sinking the 375-square-metre villa into a gentle slope on the site, hiding it from view on approach under a green roof and creating a pair of stepped terraces on the opposite side.

“The villa’s layout creates a flow and connection between formal and informal functions, and combines practicality and wellbeing,” explained CF Møller Architects.

“A green roof on top of the villa acts itself as an upper terrace, [and] a lower terrace and garden include two water features,” the studio continued.

“The result is, from the outside, an almost invisible villa snuggly fitted into the landscape with beautiful views towards the Oslo Fjord and defined areas for business and family life.”

Two sweeping concrete ramps at either side of the home cut beneath its grass-topped roof, which is dotted with skylights and punctured by a courtyard with an additional access stair.

Internally, the layout and material treatments of Villa Aa are divided into a darker and intimate subterranean section on the north side, and a brighter and more exposed area to the south.

The ramp to the northwest leads into a corridor that is lined with smoked wood and runs along the north side of the home, where the office, bathroom and guest bedroom spaces are located.

In the brighter southern half of the plan are the three main bedrooms and a living, dining and kitchen area, which are enclosed by glass sliding doors that open onto the terraces. 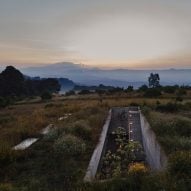 In the brighter spaces, pale wood panelling and furniture contrast with the exposed concrete and steel columns supporting the home’s roof.

Polished concrete floors extend out onto the terrace in an effort to “blur the boundaries between inside and outside”.

With almost double the footprint of Villa Aa’s interior, the terrace comprises an upper section with planted beds and seating areas, and a lower section where a rainwater pool and swimming pool evoke the water of the nearby fjord.

“The water in the pools reflects the sky and light in the same was as the fjord does, and appears as a visual connection to the open water,” explained the studio.

The dramatic landscape surrounding the Oslofjord is a popular location for villas and holiday homes. Recent projects in the area include a spruce-clad home set on the water’s edge by Jon Danielsen Aarhus and a walker’s cabin by Snøhetta.

Elsewhere, other recently completed houses that are buried into the surrounding landscape include Casa Aguacates in Mexico by Francisco Pardo and the NCaved home in Serifos by Mold Architects.

The photography is by Ivar Kaal.

Can I Sue My Dropout Daughter for the Student Loan I Co-Signed?