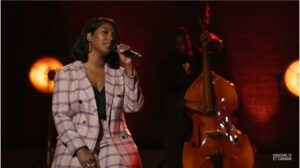 The world lost Chadwick Boseman nearly a year ago and now his wife is working to continue to keep his legacy alive and bring awareness to cancer by using her voice.

At the 2021 Stand Up to Cancer charity telecast,  Boseman performed a rendition of the 1938 song by Sammy Fain and Irving Kahal’s, “I’ll Be Seeing You.”

Part of the lyrics to the song include, “I’ll be seeing you, In ever lovely summer’s day, In everything that’s light and gay, I’ll always think of you that way.”

Toward the end of the performance, Simone becomes visibly emotional, as a photo of the couple together appeared in the background.

Before the performance, Anthony Anderson, the event’s host, paid his respect to Boseman and introduced Simone.

“The world lost an incredible artist, and a true hero. But before he was a public figure, he was a person like you or me – a son, a brother, uncle, cousin, friend, colleague, husband. Many of us are all too familiar with the fracture a dearly loved one’s passing leaves in the lives of those who love them. Here to perform a song about living with the reality of loss and finding a way forward is Chadwick’s wife, Simone.”

Boseman touched the hearts of many as he played in numerous iconic roles, including; Jackie Robinson and James Brown. He is known for bringing the “Black Panther” to life in the Marvel Cinematic Universe.

The actor quietly married Simone Ledward months before he died of colon cancer at his home in the Los Angeles area on Aug. 28, 2020. He was 43.

Simone has accepted several awards on behalf of Boseman.