This Dezeen video showcases the five architecture pavilions at this year’s Chart art fair in Copenhagen, including a restaurant covered with microgreens and a structure made out of inflatable bags.

Each of the pavilions, which are installed in the courtyards of Charlottenborg in the centre of Copenhagen, are intended to be examples of “social architecture” and aim to investigate different ways to create social and sensory experiences.

“After a year of social distancing, the finalists’ pavilion designs explore ways to come together again and to share social experiences,” said Chart.

Designer and architect Torsten Sherwood and Benedicte Brun created a pavilion comprising a dining table placed under a canopy embedded with edible microgreens.

Called Field, the structure features a long dining table and bar area connected by a curved roof made from microgreens. It aims to investigate how the combination of architecture and culinary experiences can bring people together.

Another pavilion is built entirely from white dunnage bags, which are often used to protect cargo during shipping. The inflatable bags are held in place by bright orange ratchet straps.

Called Leverage, the structure is designed to be a hangout area during the fair, with individual dunnage bags placed around it for seating.

It was designed by Danish studio Rumgehør, which is made up of architects Rasmus Maabjerg, Nikolaj Noe and Victor Tambo, who said they wanted to investigate “the leverage between social interaction and temporary architecture”.

Curtain Call is an “ever-changing and adaptable” space made entirely of re-purposed industrial textiles from banners, museum signs and posters.

The pavilion is designed by a group of artists, designers and architects including Rosita Kær, Nina Højboldt, Thomas Christensen, Sam Collins and Lauda Vargas.

Textiles are attached to the roof of the pavilion in a pattern that creates a spiralling path through the pavilion, illuminated with lights embedded in the ceiling. During the fair, the structure is being used as a space for musical performances and workshops.

Copenhagen-based Guilt Studio has created a pavilion featuring a towering roof made from suspended air ducts, which redirect wind, sound and light to create sensory experiences for visitors.

Called OM, the pavilion is being used as a bar during the fair.

The fifth pavilion, called Situated Exteriors, uses a steel grid to create a human-scaled version of its venue, the Charlottenborg mansion in Copenhagen. Using a thin wire grid, the architects scaled-down and reconstructed the facade of the building.

Designed by architects Katherine Birkbak, Anja Fange and Joe Mckenzie, the pavilion acts as an oyster bar during the fair.

During the course of the fair, the pavilions are used as bars, restaurants and hangout areas and at the end, one pavilion is chosen as the overall winner. 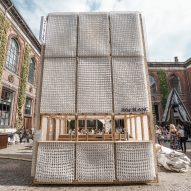 Previous pavilions have included an algae-producing structure by Space10 and a pop-up bar made from recycled IKEA mattresses.

Chart art fair is an annual event in the centre of Copenhagen featuring a public programme of exhibitions, talks, performances, music and book fairs.

The fair is held in Charlottenborg, a mansion in the centre of the city that is home to the Royal Danish Academy of Fine Arts.

All images are by Joakim Züger, courtesy of BARSK Projects.