Clusters of buildings enclosed by a tall, white wall form an educational campus for children with disabilities that was designed by Chilean studio Sebastián Irarrázaval Arquitectos.

The Juan Luis Undurraga Integral Stimulation Center is located in Talagante, a town on the outskirts of Santiago.

The school was designed for the care and education of children with a range of disabilities, including autism, Down syndrome and extreme epilepsy. It was commissioned by the Isabel Aninat Echazarreta Foundation, a charity started in 1986.

“Through its initiatives, this institution seeks to contribute to generating positive changes that translate into a better quality of life for the community,” said Sebastián Irarrázaval, who leads an eponymous studio in Santiago.

The architect was charged with designing a series of facilities – classrooms, laboratories, a gymnasium, a chapel and a heated swimming pool – for a large, L-shaped site. 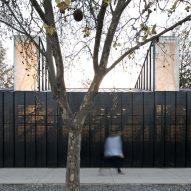 Overall, Irarrázaval sought to achieve variation in the campus through three elements: a balance between repetition and difference, an alternation of full and empty spaces, and the treatment of light.

The 3,100-square-metre complex consists of clusters of buildings and patches of open space. To provide a safe and secure environment, the campus is encircled by a tall, white wall.

“We proposed to accommodate the varied and dissimilar programs in the manner of a walled citadel that would provide children with a protected environment,” the architect said.

The complex is laid out in a nonlinear format, resulting in different types of movement. Some of the circulation routes have a labyrinthine quality, while others are more hierarchical and orderly, the architect said.

Made of white-painted concrete, the building clusters house different student groups. The buildings designated for children with extreme physical and cognitive challenges are placed closest to the pool.

Inside, rooms feature simple finishes such as white walls, wooden cabinetry and green-tinted concrete flooring. Skylights in rooms and corridors bring in daylight and help create rhythmic interplays of light and shadow.

The perimeter wall, which rises several metres, is punctured with small, round holes that produce dotted patterns of light within the complex.

The school has two key entrances, both of which are marked by rectilinear volumes that stretch upward. The main entrance is next to the administration building, while a second entrance is located near the chapel.

“Both places are marked by towers that not only play an active role as visual points of orientation but also symbolise the civil and religious powers that stand behind the foundation,” the architect said.

Other educational facilities in Chile include a university innovation centre by Pezo von Ellrichshausen that features curved walls and circular voids, and a renovated school by architects Guillermo Hevia García and Nicolás Urzúa Soler that has large skylights and a glass-walled pavilion.

The photography is by Cristobal Palma.