Colombian architecture studio Cinco Sólidos has renovated a gabled house in the mountains outside of Medellín for musician J Balvin to appear as a “house in the air”.

The studio used the footprint of a previous construction when designing Casa Aire, which was designed to make the home appear separate from a steep site.

“In terms of its conceptual development, the house revolves around the interest of expressing lightness and buoyancy as principles,” said the studio.

“The design ensures that its interior and exterior are perceived as separate from the land on which it sits, as if it were a house in the air.”

With 1,593 square metres of living area, the house was built parallel to a slope, having a series of rooms that connect to cantilevered pool decks.

The home was clad in concrete panelling with steel accents that were painted a light green and consists of a series of gabled volumes with large swathes of glazing.

“Raw materials, reflections against mirrors of water, dry gardens, colored light and furniture combined with the elevation of its geography makes the house an element that detaches from the earth and floats,” said Cinco Sólidos.

The front of the home has solid concrete walls that frame a recessed entryway with a prominent sliding door.

A glass-lined interior courtyard that hosts another tree can be seen from the front, opening a direct line of sight between the driveway and the landscape.

This courtyard is central to the interior spaces as it creates a focal point in the public areas, positioned between the living and dining rooms.

From here, a hallway, glazed on one side to frame the bonsai reflection pool, heads away from the public areas towards the home’s three bedrooms.

At the courtyard and entryway, the roofline is flat, so the gabled forms of the adjacent public and private programs could have clerestory windows.

In the living room, where there is an open-concept kitchen, the high gabled ceiling with exposed board-form concrete slopes down toward the floor-to-ceiling opening that connects the living room to the terraces. Curved Pierre Paulin couches were placed around custom, low-lying coffee tables.

At the far side of the room, another wall has floor-to-ceiling glass to further the floating sensation of the interiors.

The light green accents on the exterior steel girders were continued on the inside, which also features hardwood flooring with natural finishes.

The green also appears on an expansive shading screen that can be pulled across the whole of the rear facade to shade the interiors and provide protection from the elements. 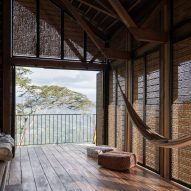 For the terraces, awnings with steel stilts provide a transition from the indoors to the outdoors. Wooden decks with a series of pools, garden boxes and recessed seating areas step down with the slope.

“Its use depends on the place where he is and although it was planned as a secondary house, it has the equipment to become a permanent residence if desired.”

The house was designed for Jose Balvin, known by the moniker J Balvin, who is internationally recognised for his contributions to the Reggaeton music genre.

Other projects in Colombia include a brick vacation home in the jungle by Plan:b Arquitectos and a wooden home raised above a fragile ecosystem by ZITA.

The photography is by Anna Dave unless otherwise noted.