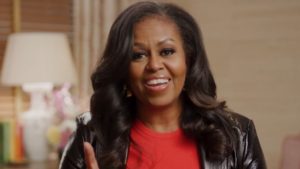 The award, which was established in 1991, is awarded to Americans who have worked to advance racial equity. Past winners include Rev. Jesse Jackson, attorney Benjamin Crump and journalist Tom Brokaw.

The NCRM, based in Tennessee, made the announcement on Twitter Thursday. Obama will share the award with the Poor People’s Campaign, a civil rights group that works to fight systemic racism, poverty and ecological devastation, the museum said in a statement.

According to The Hill, Obama was an honoree for last year’s award due to her initiatives and her activism in public health and expanding access to education for girls across the world.

“Through her four main initiatives, she has become a role model for women and an advocate for healthy families, service members and their families, higher education, and international adolescent girls’ education,” the official announcement.The first Black First Lady also campaigned to improve public school lunches during her time as the first lady.

The museum announced Wednesday the awards show will take place Oct. 14 in a virtual ceremony to honor Poor People’s Campaign leaders Reverend William Barber and Reverend Liz Theoharis and Obama. The former first lady will also be inducted into the National Women’s Hall of Fame the same month.

The ceremony will also feature a special tribute to honor Darnella Frazier, the teenager who recorded the muder of George Floyd on her phone last summer sparking the resurgence of the Black Lives Matter movement.

“A special moment will focus on those events this past year that changed the way this nation sees and deals with racial injustice including a special tribute,” award producer Faith Morris told Reuters.

Since her husband left office, Obama has written a book and started several Netflix shows.;

Jeffrey Smith on the Existential Threat of Gene-Edited Microbes