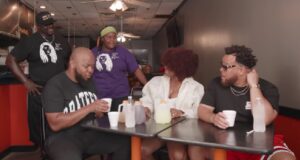 Comedian Kevin Fredericks, better known to fans as KevOnStage, is set to premier a new series called What’s Good, which will spotlight Black-owned restaurants across the country.

The new show launches Nov. 26 on Fredericks’ own streaming platform, KevOnStage Studios. The premise follows the comic’s real life touring tradition of discovering local cuisine while on the road, he explains in the show’s trailer.

“It’s always been my dream to create a food travel show,” he says. “I like to eat, I love to go to new cities and eat the food that’s only available in that city.”

For What’s Good, Fredericks will be joined on the road by a group of friends, who help drive the series along with their own witty commentary about the food. The comedy-meets-Food Network experience will not only introduce fans to independent restauranteurs and the work it takes to keep their small businesses open, but also offer a more intimate look into Frederick’s day-to-day interactions.

Along the way, viewers will get to discover these restaurants’ takes on all-American favorites like oatmeal cookies, which Fredericks says he believes is “the supreme cookie,” to international staples like Jamaican oxtails and rice and peas, and Nigerian jollof rice.

In addition to the culinary experience, the show also takes viewers on a journey of each city, complete with site seeing and exploring local traditions. The cast of What’s Good, who fans will recognize from Fredericks’ online content, are joined by a few more familiar faces, including Houston rapper Tobe Nwigwe and writer Luvvie Ajayi.

According to the Houston Chronicle, KevOnStage Studios launched in 2020 as a way to continue his efforts to support other comedians. The network, which is available on most streaming services including Apple TV and Roku, features original content from Fredrericks and several other comedians who have gained popularity through social media.

15 Small Businesses on Amazon to Support All Year Long

6 Winter Loungewear Trends That Are Promising to Be Huge