Dutch hotel group CitizenM has opened a hotel in Downtown Miami in a high-rise building with multiple terraces that was designed to be a “3D art piece”.

For the 277-foot-tall (84-metre-tall) building in Downtown Miami, Amsterdam-based architecture studio Concrete worked with Gensler as the local architect to carry out the design of the tower.

The envelope features large swathes of concrete and glass organised in a series of discreet boxes that break up the massing of the facade.

Since construction, much of the facade has been dedicated to a massive mural by American artist Jen Stark.

“The architecture is considered as a 3D art piece with large colorful murals by Jenny Stark on every side of the building; by this the building is recognizable among all the other buildings,” said Concrete.

“By using twisted boxes, you can experience the art from all sides.”

Inside, a glass-lined entryway is meant to act as an “art gallery” as visitors access the set of elevators that go up to the lobby level on the second floor.

The lobby space features a number of modular couches, workstations and plenty of light, with exposed concrete beams supporting a ceiling with wood accents. 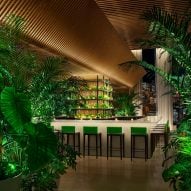 Also on the second floor is the canteen area, which features a black-and-white checkered floor and a wraparound bar with a black marble countertop and wood panelling topped with a hanging bar cage that holds a number of plants.

The 20-storey building has 252 rooms, as well as a series of meeting rooms on the third floor. The rooms are mostly micro-suites, with some of the smallest clocking in at less than 200 square feet (60 metres).

Despite the small size, most of the rooms have an extra large bed that sits under the window with storage space underneath.

The bathrooms are tucked across from a compact sink and wrapped in polycarbonate that has been outfitted with LED lights. These can be controlled through a tablet that manages most of the room’s functions, including the blinds, television and room services.

Throughout the property, most of the furniture was sourced from Swiss furniture company Vitra, with whom the hotel chain has a long-standing relationship.

For decoration, the hotel held a competition that selected local artists. CitizenM Miami Brickell is also the first location to have a rooftop pool for the brand.

Since its inception in 2008, the hotel chain has expanded internationally with 27 hotels, and the hotel plans to open two more in Miami.

Earlier this year, CitizenM announced a project that aimed to make it the first hospitality company to have a hotel in the digital space known as the Metaverse.