Architecture research studio Condition_Lab has completed the Pingtan Book House in China‘s Hunan province, which features a double-helix staircase designed to provide space for children to read and play.

Located in a village of Pingtan, the 80-square-metre library sits on the perimeter of a primary school courtyard that serves as a playground for over 400 local children.

Instead of creating a library with traditional floors and rooms, Condition_Lab designed Pingtan Book House’s interior as a large double-helix staircase with spacious landings and treads that double as seating.

“Children are instinctively encouraged to play games like hide and seek, creating an atmosphere of joy and happiness.”

The two intertwining staircases begin on the ground floor on opposite sides of the square building. They spiral upwards three storeys around a square void, before meeting again at the top level.

“When you visit the building, there are very beautiful sounds from being able to hear people talk and speak but not being able to visually locate them,” added Condition_Lab. “One of the children told us it is like entering a video game – a testament to how the times are changing.”

Condition_Lab hired local carpenters to build the structure of the library, which utilises local wood and construction techniques.

According to the studio, it is informed by the traditional wooden homes in the village belonging to the Dong people, a Chinese ethnic minority group. 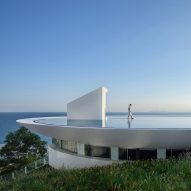 “Dong culture is directly related to wood, so we decided to use the local timber China fir, a soft wood that is indigenous to the area,” said Condition_Lab.

“The timber construction of the Book House follows the traditional Dong tendon and mortar system where all beams and columns are prefabricated off-site and assembled on site,” it continued.

“Contrary to Japanese and Korean joinery, where the joint is typically exposed, in Dong carpentry, the joint is completely hidden from the viewer.”

A wooden grid structure lines the walls inside the library. On two elevations, these are used as bookshelves, while the others are punctured by windows that look out to the courtyard and nearby rice fields.

The facades with windows are decorated with a pattern of transparent, translucent and opaque panels – made from acrylic, polycarbonate and stainless steel respectively – which are tilted at different angles.

“For the pattern, we wanted to create some form of movement, hence we articulated each plane in a different direction so when light falls on the facade, it generates different reflections,” said the studio.

“The square pattern is also an interpretation of some traditional textile decorations we found embroidered in local costumes, further relating to Dong culture,” it continued.

Condition_Lab designed the library as a fun educational space for children to learn and play while creating a strong link to the town’s traditional culture and craft.

The project has been shortlisted in the cultural building category of Dezeen Awards 2022, alongside a concrete open-air concert hall in Beijing and a brewery in Tehran that has been converted into a contemporary art museum.

The photography is by Zhao Sai.