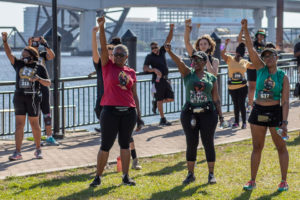 The death of George Floyd and the resurgence of the Black Lives Matter movement led corporate America to acknowledge its decades of silence. That led them to take an active role in confronting and ending systemic racism.

One of the key findings in the Post’s corporate America analysis was that 90% or $42.5 billion that was pledged came in the form of loans or investments. However, many of the companies stand to profit from the pledges.

Additionally, more than half the funds allocated came in the form of mortgages. Two banks, JPMorgan Chase and Bank of America accounted for almost all of those commitments.

The other $4.2 billion corporate America pledged came in the form of grants. However, of that amount, just $71 million went to organizations focused on criminal justice reform. The original reason millions of Black Americans began protesting in the streets after Floyd’s death.

The $4.2 billion in grants, which are to be distributed over the next decade, account for less than 1% of the $525.6 billion in net income earned last year by the top 50 companies in corporate America.

“Corporations are not set up to wield their power for the greater good as much as we give them credit for, a lot of times,” Phillip Atiba Goff, a professor at Yale University who co-founded the Center for Policing Equity, told the Post. “They are constrained by things they feel they need to do to manage their brand in a world where Black liberation does not have consensus.”

Una Osili, an associate dean at Indiana University who leads the research and publication of Giving USA, the annual report of American philanthropy, said it wouldn’t be easy to tell if the pledges will deliver actionable results. Especially considering no single entity is tracking the funds or where they go, and corporations aren’t required to report on the funds.

Some 20 organizations in corporate America gave to the National Urban League, 19 gave to HBCUs and the NAACP Legal Defense and Educational Fund, 18 Gave to the Equal Justice Initiative, and 13 gave directly to the NAACP.

Review: Orly's Lisa Frank Nail Polish and Stickers Send Me Back to Childhood