Planks of scorched wood clad the exterior of Pine Nut Cabane, a wooden retreat in the south of France designed by London studio Daab Design with cabin manufacturer Moustache Bois.

The 35-square-metre cabin was created for a family who wanted a flexible space for their existing farmhouse that could serve as a painting studio, guest house or room for family gatherings.

Pine Nut Cabane occupies the family’s favourite location on the rural site – a small clearing between a pine forest and an olive grove – which they use as a place for painting or playing pétanque.

To complement its setting, Daab Design clad the cabin with planks of scorched pine wood that take cues from the area’s farming vernacular.

“At the Pine Nut Cabane, our design needed to work with the natural elements at the very special and sentimental site,” said Daab Design’s co-founder Anaïs Bléhaut.

“We worked closely with our project partners, Moustache Bois, and our clients to incorporate natural materials and design interventions that would really celebrate and enhance the location and views,” she continued.

Pine Nut Cabane is oriented so that its glazed corner faces eastwards to capture the rising sun over a nearby valley, while the pine forest forms a shield from the intense southern sun.

A cut in the northeastern corner of the structure defines the black timber-lined entrance area and limestone-paved terrace, which are sheltered by the deep eaves along the cabin’s northern edge.

Inside, two rooms with simple finishes and large windows are positioned at either end of the cabin and designed to accommodate a wide range of potential uses.

Built-in storage and desks allow the spaces to be easily transformed from guest bedrooms into studios for painting or yoga.

In between the two rooms is a central bathroom pod, which is finished in matte black wood and features a “cave-like” shower lined with terracotta tiles.

Matte black wood has also been used for full-height doors that can be closed to separate the two rooms when more privacy is required, or to create a central corridor and cross ventilate the cabin when left open. 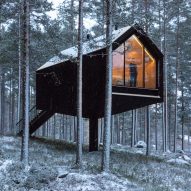 The glazed corner of Pine Nut Cabane’s eastern room opens onto a wood-decked terrace where there is a seating area and firepit with dramatic views of the landscape.

Internal finishes, which were chosen to create a feeling of calm and respite from the strong sun, include plywood panelling and polished concrete floors, which contrast with the matte black finish of the doors, bathroom pod and window frames.

Daab Design was founded in 2014 by Bléhaut and Dennis Austin. In London, the studio recently completed the conversion of a former art dealer’s vault into a basement flat, working with an archaeologist to restore a number of original Georgian features.

Other cabins recently featured on Dezeen include a black workspace for a filmmaker beside a Finnish lake, a stilted getaway in a forest in Hungary and a garden studio for a writer in Spain.

The photography is by Henry Woide.

I Dumped My Live-in Boyfriend. Do I Owe Half of the Bills?