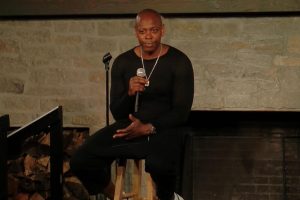 Following a star-studded event featuring a screening of his new documentary, Untitled, Dave Chappelle addressed both his latest cancelled appearance and the special that has kept him in recent headlines.

The screening took place in Indianapolis on Friday, the same day it was announced that his high school alma mater – the Duke Ellington School of the Arts – had first cancelled, then postponed an event at which the comedian was scheduled to be honored. After sharing the film with a near-capacity crowd at Gainbridge Fieldhouse, he took the stage for a 15-minute comedy set, during which Indystar reports he made several comments about being cancelled.

“They’re canceling stuff I didn’t even want to do,” Chappelle joked.

The event in question was originally scheduled to take place on Duke Ellington’s Georgetown campus on Nov. 23 and was set to be a fundraiser to help build a new theater in Chappelle’s name. According to Yahoo!, the event has now been pushed to Apr. 22.

No word as to whether the theater will still be named after Chappelle, in light of students’ concerns about his recent material. He did say during his set that he had been uninvited from the fundraiser.

His controversial Netflix special, The Closer, is also part of the reason why Chappelle is screening his new film in a series of independently organized shows rather than theaters. He said in a video on Oct. 25 that following the backlash, the film had been dropped from several film festival. He also stated that he could not find a distributor to support his project.

Untitled captures the planning and execution of several outdoor comedy shows which Chappelle hosted during the summer of 2020 in a neighbor’s corn field in his hometown of Yellow Springs, Ohio.

The comedian kicked off a 10-city screening tour for the project in San Francisco on Nov. 4, which is set to wrap in New York City on Nov. 22.