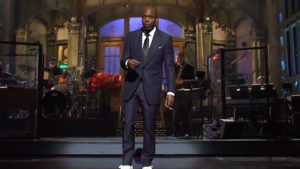 The Duke Ellington School in Georgetown, D.C. has postponed a planned fundraiser with comedian Dave Chappelle after students threatened to stage a walkout.

The school planned the fundraiser to raise funds for a new theatre that was supposed to be named after the comedian, but students who were uncomfortable with the comedian’s words in his recent Netflix special, The Closer.

After the announcement, the school sent out an email to patrons saying the event was postponed until next April.

“We recognize that not everyone will accept or welcome a particular artist’s point of view, product or craft, but reject the notion that a ‘cancel culture’ is a healthy or constructive means to teach our students how society should balance creative freedom with protecting the right and dignity of all of its members,” the school said in a statement, according to a Politico newsletter.

According to Yahoo News, two students at the school said they were uncomfortable supporting Chappelle because many of their classmates identify as support of the LGBTQ+ community. The two students told Politico their peers got into a heated debate with faculty after they were told they would have to help put together an exhibition honoring Chappelle on the same day as the fundraiser.

In his new Netflix special, The Closer, the comedian called out White members of the LGBTQ+ community saying they have the ability to hide behind their race when it’s convenient The Half-Baked star also agreed with Harry Potter writer J.K. Rowling that gender is a fact and said he’s a member of “team TERF,” meaning “trans-exclusionary radical feminists.”

Chappelle has donated $100,000 to the school over the years and an Emmy award he received in 2017. Chappelle has also invited numerous guests to appear at the school with him including Chris Tucker and Bradley Cooper.

Chappelle, who also made a documentary about holding outdoor comedy festivals, at a neighbors corn field in Ohio during the pandemic, also had to change the way he released it due to the backlash from The Closer.