The 63,000-square foot (5,850 metre) project – called Tahanan, the Tagalog word for “coming home” – was completed in November 2021 through a financing prototype that aimed to accelerate the timeline and reduce the cost of permanent supportive housing.

“This is a particularly meaningful project for our team, because it provides homes to formerly unhoused people, along with the services they need to thrive,” said David Baker Architects (DBA) principal Daniel Simons.

The six-storey project stacks 87 two-unit boxes – fabricated by Factory OS in nearby Vallejo – atop a concrete podium that contains a flexible community room, in-house social services, and tenant retail space.

David Baker Architects designed the modules with an angled end that creates a sawtooth facade along the project’s western edge, orienting the 290-square foot (27-square metre) apartments toward downtown San Francisco, rather than the adjacent judicial complex.

The compact units contain only the necessities — a bedroom, kitchenette and bathroom – and rely on the support services and amenities of the building and surrounding neighbourhood to fill out the rest of the residents’ living spaces.

“The site is in the SOMA Pilipinas Cultural District, established to preserve the cultural diversity of the area by highlighting the culture and contributions of the Filipino American community,” the studio said.

Simons noted the team’s interaction with the local community group SOMA Pilipinas group “had a direct and strong influence on the patterns, textures and colors of the project, especially the exterior and the public spaces.”

“This interplay facilitates social connection and offers visual links across the varied spaces, including a peek into the life of the building from the street,” the studio said.

The design utilises best practices that both the studio and the developer, Mercy Housing, have found through years of supportive housing design to help residents feel safe and welcome.

“The fully-equipped apartment homes, calm and private case management offices, and spacious communal areas provide an excellent foundation for residents to build towards their personal goals.”

The project’s goal – to provide people with secure housing as quickly as possible to combat California’s homelessness crisis – was expedited through the use of philanthropic funding from Tipping Point Community and the San Francisco Housing Accelerator Fund.

The use of modular construction reduced the project’s timeline from the average five to seven years to three. The prefabricated modules were installed onsite in just 10 days. 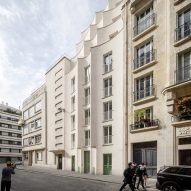 “Another gratifying aspect of the project was being able to meet aggressive goals of reduced cost per unit along with an accelerated schedule to occupancy,” said DBA modular lead Jonas Weber.

“These goals often work against one another, and the development, design and construction teams were collectively committed to defying conventional wisdom.”

The studio recently released a monograph that outlines its methodology for creating social housing.

The studio, with offices in San Francisco, Oakland, and Birmingham maintains that affordable housing should be indistinguishable from market-rate housing and has constructed a number of social projects like a convex, tile-clad micro-unit development in nearby Hayes Valley.

The photography is by Bruce Damonte.