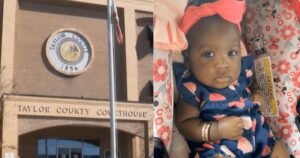 The family of 2-month-old Jersi McKnight is demanding justice after a Florida grand jury decided not to indict a daycare owner on criminal charges in the infant’s death during her first day at Hugger Family Daycare.

McKnight’s mother, Martasha Robinson, told WCTV she dropped her baby off on the morning of Aug. 9 at the state-licensed, in-home facility in Perry, FL, which had been highly-recommended by several people.

Around 3:30 p.m., Robinson received a call from a frantic parent telling her that something had happened to one of the children at Hugger.

“My heart stopped,” Robinson recalled. “I’m getting closer and closer to the scene and there’s an ambulance and detectives and police lights.”

Once she arrived, she was told that her daughter had been left unattended on a changing table. The 2-month-old somehow managed to fall off the table and into a mop bucket, in which she drowned.

While the Perry Police Department told the local news station that McKnight’s death is still under investigation, a Taylor County grand jury voted 10-8 not to move forward with criminal charges.

Despite the personal recommendations, Robinson and her family have since learned that Hugger Family Daycare had twice been found by the State of Florida to be non-compliant. Just five weeks before McKnight’s death, the facility had been fined for having seven children under the age of three in their care, which is more than the state allows.

While local authorities consider new evidence, leaving open the possibility of charges being filed against the staff and owners at Hugger in the future, the family is consulting with an attorney to begin the process of filing a civil suit.