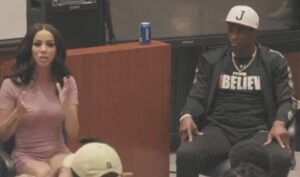 Ahead of celebrating Jackson State University’s first SWAC Championship since 2007, Deion Sanders made headlines last week for recruiting an Instagram model to teach his players “the other side of the game.”

Sanders, who became JSU’s head coach at the start of the 2020-2021 school year, shared a video to his own IG profile on Friday, in which he welcomed alumna Brittany Renner to offer his players some insights about the perils of dating as an athlete.

According to the Clarion Ledger, Renner’s rise to prominence as an influencer came in 2018 after a video emerged in which she called athletes “really dumb” and suggested having a baby with one as a means to a financial goal.

Her past relationship with Charlotte Hornets star PJ Washington, with whom she shares a child, has been internet fodder over the last few months. Since the couple split in July, Renner has been accused of “grooming” Washington, who she when she was 26 and he was still a student at the University of Kentucky, the New York Post reports.

In October, the 29-year-old came under fire after posting a selfie which she captioned, “Hey Jackson State! Hide your sons!” The selfie was apparently taken during the same visit during which she addressed the football team.

“It’s my responsibility as a coach to prepare my young men for any and everything on the field and off,” Sanders captioned the clip. “I brought in [Renner] to educate them on how the game is played between man & woman at their age & stage. The message may not be for everybody but trust me it’s for somebody.”

After a raucous welcome by the JSU players, Renner went on to explain the transactional nature celebrity relationships can take.

““Naturally, if you play a sport, that’s an incentive to talk to you,” she said. “A lot of times women, men in general: everybody wants something. Even if we have our own thing going on, it’s like me being with you is good because you boost my stock. I boost your stock. It’s that simple.

“It’s a give-and-take but you have to be aware of what you’re signing up for,” she continued. “You’re trying to make it to the NFL. You do understand there’s a lot that comes with that, right? To be able to decipher who really loves you for you, I think that’s the billion dollar question we’re all wanting to know.”

The irony of Sanders’ choice of guest speaker was not lost on Twitter users, who reacted to news of the starlet’s on campus talk with enough jokes and memes to have Renner’s name trending for hours after the video was released.

That’s like inviting a pack of wolves to a little lamb social!

Are We Stuck Paying My Husband's Friend's Student Loan Forever?