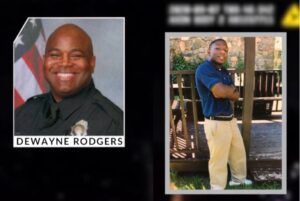 Denver Police officer Dewayne Rodgers has been relieved of his duties after an investigation found that he failed to provide first aid to an 18-year-old gunshot victim who subsequently died from his injuries.

Rodgers was responding to a call at an area apartment complex on Sept. 7, 2020, when he was directed to JaLonte Jones, who was laying on the ground after having been shot. According to the Daily Mail, Rodgers said that the victim was bleeding so profusely that he couldn’t determine exactly where he had been shot.

The 16-year veteran immediately called an ambulance to the scene, but claims that he made no attempts to administer first aid because he didn’t want to aggravate Jones’ injury.

“I make the decision at that time not to touch him, because I can’t figure where he’s shot at,” the officer wrote in an incident report. “I don’t know how many times he’s shot. Nobody could give me the information that I can’t touch him. If I touch him, I might cause more harm than good to this guy, because I don’t know anything. Where he’s been shot or how many times he’s been shot.

‘So, at that point I decided I’m not going to touch him,” he continues. “I’m going to keep him talking to me and keep him calm and try to keep him moving a lot.”

Bodycam footage captured Rodgers interrogating Jones about what had happened to him as the teen requested help several times, at one point event saying that he felt he was dying.

An ambulance arrived on the scene 13 minutes later. Jones was pronounced dead at the hospital that evening.

In a statement to Fox 31, DPD indicated that the department had concerns about the way Rodgers handled the situation during the earliest stages of their investigation into Jones’ death. Following an Internal Affairs investigation, Rodgers was terminated on Nov. 22 with a Denver Police Department Departmental Order of Disciplinary Action signed by Mary Dulacki, the chief deputy executive director of Denver’s Department of Public Safety.

‘The callous lack of humanity that Officer displayed is best exemplified by his response to the victim saying, ‘Oh my god. Help me,’ when Officer Rodgers replied, ‘Do you live in this complex?,” the order read.

All Denver Police Officers received training on the use of tourniquets in 2014 and all recruits brought into the force since 2015 have received Tactical Casualty Care for Law Enforcement training. Rodgers said that he didn’t have his tourniquet or latex gloves at the time of the incident, but also said that the absence of the gloves was not enough to prevent him from offering first aid.

“I do feel like if more effort would have been put forth, then maybe they could have saved his life,” JaLonte’s mother Dedranette Jones said. “Did you just not care enough? Did you look at it like this is just another gang member? He’s essentially bleeding out in this parking lot, and you seem to be more concerned with what happened and who shot him as opposed to finding the injury and trying to do whatever you can to help preserve his life.”

An unnamed police officer who arrived on the scene nine minutes after Rodgers had called for an ambulance resigned as the Internal Affairs investigation was underway.