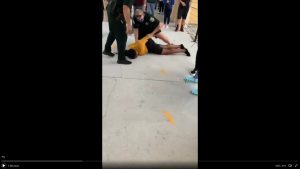 Earlier this year in January, BLACK ENTERPRISE reported that the sheriff’s department in Osceola County, FL, was looking into an incident involving a school resource officer who was seen on camera at a high school body-slamming a Black teenager, Taylor Bracey to the ground. She appears unconscious before the officer handcuffed her while she laid motionless.

According to Click Orlando, the State Attorney stated that the school resource officer will not be charged with a crime because he acted within bounds of Florida’s use of force laws.

Orange-Osceola State Attorney Monique Worrell announced earlier this week that the Osceola County deputy, Ethan Fournier, who, at the time, was a school resource officer at Liberty High School, will not face any formal charges. Worrell said that Fournier acted within the bounds of Florida’s use of force statutes.

“After a thorough review of the evidence, and the applicable law in this matter (the independent review) team has concluded that officer Fournier’s use of force did not violate any laws of the state of Florida,” she said. ”As such, there will be no criminal charges filed in this matter.”

Under Florida’s use of force statute, police officers can use force under certain circumstances, including when making an arrest.

The officer also spoke at the announcement of the news.

“I was the longest-serving SRO in Liberty High School’s history with four consecutive years as SRO. Liberty is filled with great kids and staff. I could have left and went to different schools each year but I chose Liberty, every single year,” Fournier said in a written statement. “I’m reminded daily by the calls and texts from the students and players I coach, the parents and staff that I am loved, and I missed on campus.”

He also mentioned that if given the chance, he would like to go back to serving at Liberty High School.