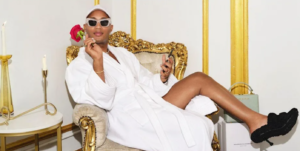 Brandon Blackwood, 29, graces the cover of In The Know‘s inaugural luxury issue, and who is better than the new-age fashion designer making waves in the name of Black luxury.

Blackwood’s popular “End Systemic Racism” tote has made him a viral sensation in the fashion world. Speaking with In The Know‘s Consulting Editor-at-Large Elaine Welteroth, Blackwood shared how he built a cult following among Gen Z and millennial consumers who help to co-create his pieces.

“I call my followers my cousins,” Blackwood said. “I’m like, ‘Hey cousins, I’m trying to do this and this and this.’ And some of my best colorways, textures [and] things like that have been suggestions from my community.”

“I used to post my swatches for the season before and be like, ‘Okay everyone, pick them out. Let’s figure it out.’”

Posing with one of his blue mini Kendrick totes, Blackwood shows off an assortment of his handbags that have been worn by the likes of Halle Berry, Kim Kardashian, and more. Before the age of 30, Blackwood has built a handbag empire that’s on track to take in $30 million in revenue, Business Insider reports.

“I think after college, when I learned that I can do things myself and I was in control of my own life, that’s when I started doing my own thing,” he said of launching his fashion company. “I think when everyone else couldn’t necessarily control me, that’s when they started supporting me.”

As one of the frontrunners of Black luxury fashion designers, Blackwood recalls not associating luxury with Black culture as a child.

“Growing up, personally, I didn’t have any real examples of Black-owned luxury brands,” he admits. “Whenever I thought of luxury, it was always a white person in a white ad by a white company; that was luxury to me”

“I think the idea of a Black person kind of taking up that space and having luxury be their narrative is very, very different and a little wild to people. That’s why we need the Kerbys and the Auroras and the Christopher John Rogers,” Blackwood continued. “And I think it’s really cool to see this movement of just Black people in luxury, making things happen, making things relevant. That’s what normalizing Black luxury to me is. It’s just taking up space within that market.”