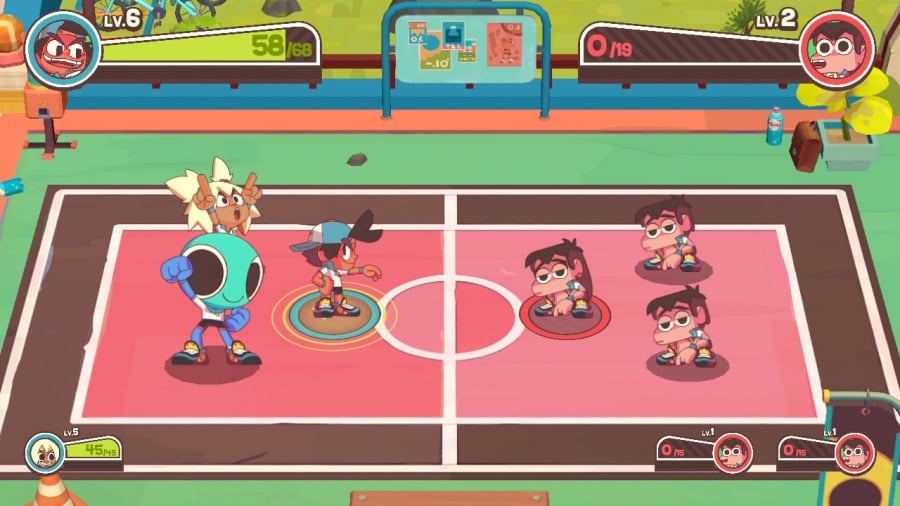 It’s very difficult to make school appealing. Persona gave it a go, and Lego Harry Potter took its best shot, but in general we just don’t want to go to school ever. Dodgeball Academia is up against it from the off, but compelling gameplay could have brought it back from the brink of enforced educational apathy. Sadly, it’s just not quite there.

Points for effort, though. Dodgeball Academia is a terrific-looking game, with a marvelous cartoony style that constantly impresses with its slickly-animated little flourishes while still feeling responsive, the way a game absolutely needs to. We think the characters and world have a vibe that’s more than a little similar to Cartoon Network’s OK KO series, to the point that we wonder if the show’s creators might need to have a little word.

So what’s the story? Protagonist Otto dodgeballs his way through eight episodes worth of narrative, spiking balls into opponents’ faces for all he’s worth. You’ll explore the grounds of Dodgeball Academia, gathering your team, levelling them up, giving them accessories — the usual RPG trappings. Unfortunately, this is all accompanied by a metric ton of interminable dialogue, to the point that we actively started skipping cutscenes after the first few hours. Shame us if you will, but we defy pretty much any player not to do the same considering the relative banality of the situations and the sheer amount of downtime where you’re simply tapping through dialogue balloon after dialogue balloon. Yes, it’s an RPG and dialogue is to be expected, but surely this could have been handled in a more graceful manner than it is here. We just wanted to get to the next bit of traversal, the next game of dodgeball. 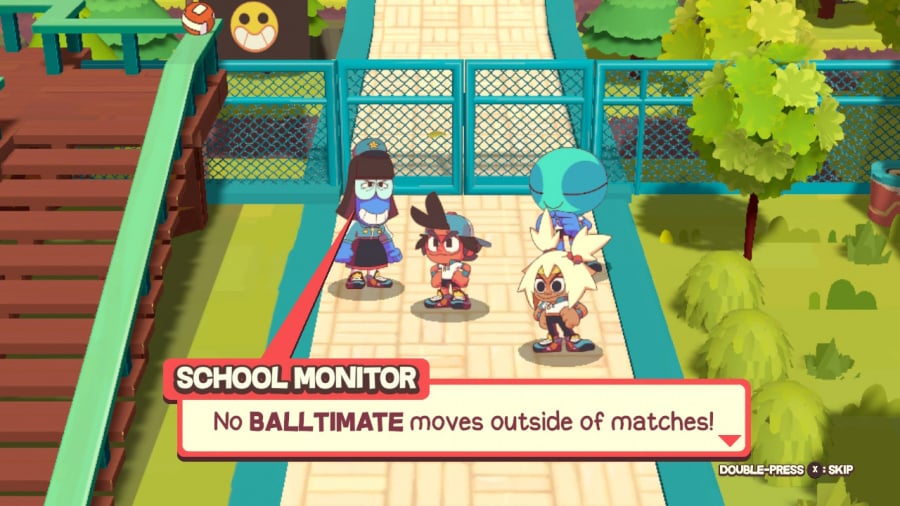 It seems prudent at this point, then, to review the actual game of dodgeball on offer in a game entirely based around it. It’s a bit of a mixed bag, unfortunately. See, while the games themselves are fast-paced and genuinely fun, you’re going to be playing a lot of them and more often than not they play out pretty much exactly the same. The core mechanics are move, throw and catch, and each of them is responsive; you throw a ball with the ‘Y’ button (holding to charge a more powerful effort) and catch incoming balls with a well-timed tap of ‘A’. The timing for the latter isn’t demanding in the slightest and you should, with some practice, find the vast majority of battles exceptionally easy.

The game also offers you “Balltimate” moves which are vastly more powerful and spectacular strikes, but you won’t really need them. Variety is instilled in the back-and-forth gameplay with enemies that use differing tactics as well as dodgeball courts laced with hazards (or frozen solid), but overall the matches remain much of a muchness — inarguably enjoyable to a point, but lacking in fluidity and almost criminally basic. The rhythm of combat doesn’t change enough for our liking and whittling down your opponents’ health is just too simple.

There are modifiers available to make the game harder or, bafflingly, even easier, which is a nice concession to accessibility. It’s worth mentioning that there’s a local multiplayer game here, too — naturally it’s more fun than fighting the computer, but overall it remains simplistic and slow paced — Windjammers is right there on the eShop, so… play that for a better take on similar gameplay. 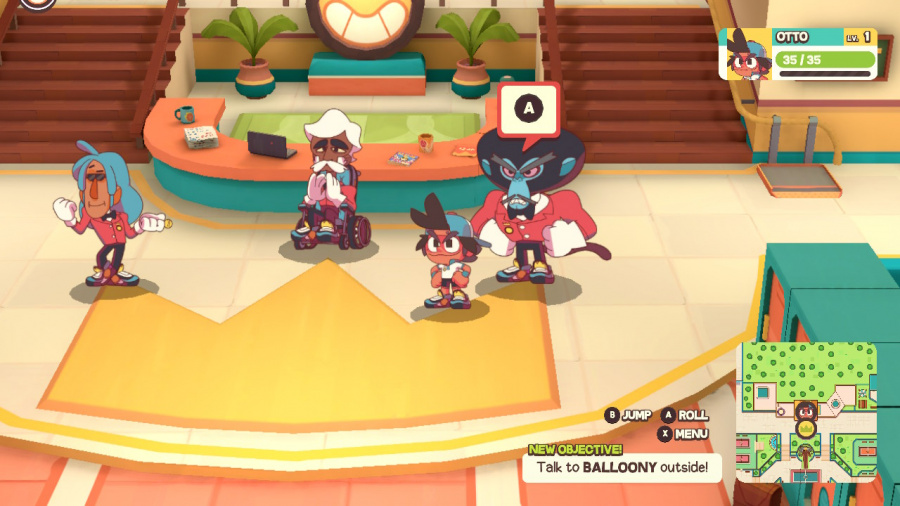 The map, the space wherein you are challenged by other players (rather like the trainer battles in Pokémon games) is very impressive and well laid-out. There are item chests and side quests to discover, and getting around is a breeze thanks to both the mini-map and a thoroughly speedy move that sees you tapping the ‘A’ button rhythmically to roll at speed to your destination. Disappointingly, though, the mini-map doesn’t work inside buildings, some of which are rather large and confusing.

Aesthetically, Dodgeball Academia is an absolute treat — we’ve talked about the strong character designs, but it’s gorgeous to look at throughout. Running at a smooth 60fps and bursting with colour, the game’s world is its strongest suit and it’s the reason we pushed ahead with it even when we had become tired of the repetition. We’d go so far as to say it’s one of the best-looking Switch games we’ve ever seen, such is its fidelity, consistency and strength of design. The music is fantastic as well, with peppy and addictive earworms overlaying each battle.

Dodgeball Academia does admittedly come together in a rather compelling way, but we’re critical of the independent elements that make up this package. You might find yourself caught up in the storyline, which could potentially make up for its other shortcomings, but we found it a little disposable. It’s clear that love has been poured into this adventure and it’s absolutely superb to look at and listen to — we just wish the central sport was a more enjoyable to play and the dialogue wasn’t so interminable. You might dig this game more if you get hooked into the grind, so to speak — battles are over quickly and levelling up is always fun — but overall, if you’re not willing to get by on sheer aesthetics, you might want to dodge this one.