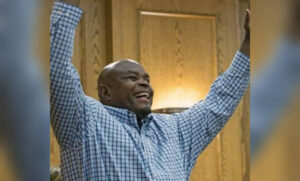 Two years after being released from prison on an overturned murder conviction, Dontae Sharpe received an official pardon of innocence from North Carolina Gov. Roy Cooper on Friday.

In 1995, at the age of 19, Sharpe was sentenced to life in prison after being found guilty of shooting 33-year-old George Radcliffe in a drug deal earlier that year. According to NPR, the state’s case against Sharpe relied heavily on the testimony of a 15-year-old witness who later admitted she was not on the scene when Radcliffe was shot.

Sharpe maintained his innocence throughout his ordeal and spent years requesting a new trial. His conviction was finally overturned when a state medical examiner testified in 2019 that the way the state had presented the murder was neither medically nor scientifically possible.

Once a judge vacated Sharpe’s conviction, the Pitts County District Attorney’s Office dismissed the charges and promised not to try the case again due to a lack of evidence, The Washington Post reports.

“Mr. Sharpe and others who have been wrongly convicted deserve to have that injustice fully and publicly acknowledged,” the North Carolina governor said in a statement announcing the pardon.

The move from Cooper comes after the NAACP and several other racial justice groups demanded Sharpe receive a formal pardon so that he could apply for compensation for his wrongful conviction. Now that he is officially and completely exonerated, Sharpe could receive as much as $750,000 from the state for the years he spent behind bars.

“This thing is commonplace now,” Sharpe said to The Post. “It can happen in so many places in so many ways, especially to people of color. People look at you like an animal or a monster, and you can’t get that out of people’s minds.”

In a virtual press conference, he told reporters he fully intends on helping others who have been wrongly imprisoned overturn their convictions, explaining that his “freedom is still incomplete as long as there’s still people going to prison wrongfully.”