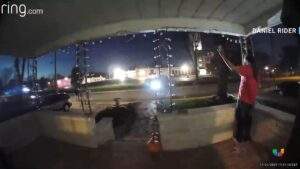 After reports of a man being questioned after being suspected of mowing down people at a Christmas parade route in Waukesha, Wisconsin, there is a video of him shortly before he was detained.

According to NBC News, a doorbell camera video captures the suspect being apprehended after the car crash that killed several people and injured many others.

The suspect, Darrell Brooks, is accused of driving a vehicle into a crowd at a Waukesha Christmas parade route. Footage from a doorbell camera before Brooks is arrested shows him pleading for help and telling someone at a residence that he was waiting for an Uber to arrive to pick him up.

The video shows police officers arriving at the home in Waukesha and telling the 39-year-old Brooks to put his hands up.

According to NBC News, Brooks is currently being questioned over the deadly crash by law enforcement officials but has not been charged with a crime at this point. CNN reported Brooks might have been fleeing the scene of another crime when he drove into the Waukesha parade route.

The resident whose front door camera caught the video, Daniel Rider, spoke to NBC News. The timestamp on the footage shows that the recording took place after 5 p.m. That is about 20 minutes after Brooks allegedly drove his vehicle through parade route barricades, killing five people and injuring dozens more. He then said he invited Brooks inside his home, gave him a jacket, made him a sandwich, and let him use his phone. Rider said he asked Brooks to leave, and he did, moments before police officers came and grabbed him.

According to TMZ, Brooks used the rap name Mathboi Fly and made a rap video some years ago. And according to reports, the video he made featured a red SUV found after the parade incident.

Brooks has a lengthy criminal history that includes sexual abuse and battery. He had been charged on Nov. 5 in a separate domestic violence case and posted a $1,000 cash bond, and was released six days later.