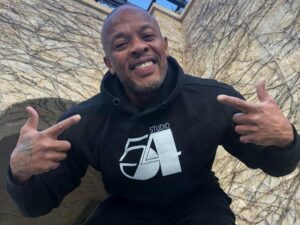 Dr. Dre went all the way into his petty bag when he was seen in an Instagram photo celebrating the fact that he’s “Divorced AF.”

Prescott’s post appears to confirm that Dr. Dre’s divorce from his wife of 25 years has been finalized. Nicole Young first filed for separation from the Beats By Dre creator in June 2020, HollywoodLife reports. The former couple shares their 24-year-old son Truice and 20-year-old daughter Truly together.

Back in January, Nicole filed court documents accusing Dr. Dre of abuse during their marriage. In court documents, Nicole claimed that Dre “held a gun to my head” twice in 2000 and 2001, and “punched me in the head/face” in 1999 and 2000, People reports. She also accused the hip-hop producer of kicking “down a door” while she hid “from his rage” in 2016, among other instances of abuse.

“Andre has verbally and emotionally decimated my personhood to the extent that I currently suffer from post-traumatic stress syndrome,” Nicole said in the documents.

Dre replied with his own declaration denying Nicole’s abuse claims saying “at no time did I ever abuse Nicole or threaten her physical safety.” But Nicole said his denial was a “blatant lie.”

Nicole and Dre had been locked in a $1 billion battle over spousal support. Earlier this year, she was awarded $2 million in support but put in a request for $100k a month to mortgage a new home.

In her filings, Nicole explained why she never called the cops and reported Dre’s alleged abuse prior to filing for divorce.

“During our marriage, I considered calling the police several times; but, as I fell deeper in to the abusive relationship, my fear of Andre outweighed any confidence I had that the police could help me,” she said.

Now that their marriage is officially dissolved, Dr. Dre wants everyone to know that he’s “Divorced AF” and happy about it. He’ll be hitting the stage soon to perform at the upcoming Super Bowl Halftime Show in February.