Eileen Gray‘s E-1027 modernist house in the south of France and Le Corbusier’s holiday home Cabanon next to it have reopened following a five-year renovation.

The Association Cap Moderne has completed its renovation of the seminal modern home on the south coast of France, returning it to the state it was in when it was complete in 1929.

The home, which is located in the village of Roquebrune-Cap-Martin overlooking Monaco, is now open to the public to visit on guided tours.

“The restoration of the Villa to its 1929 state has been a labour of love for all of us who have worked on the project,” said Association Cap Moderne president Michael Likierman.

“The effect is truly revelatory of the genius of Eileen Gray and a marvellously dynamic contrast with the surprisingly intimate buildings of Le Corbusier just by. Magical and unique: come and see for yourselves.”

One of the most significant international-style houses, E-1027 was the first major architecture project designed by Irish architect Gray.

It was designed in collaboration with her partner at the time, Romanian architect Jean Badovici, who owned the house.

The home’s name is a reference to the Gray and Badovici names. E stands for Eileen, with the couple’s initials – J, B and G – signified by their alphabetical positions – 10, 2 and 7.

The pair split up shortly after the house was complete, with Badovici continuing to live in it and 20th-century architect Le Corbusier staying for large periods in 1937 and 1938 when he painted several colourful murals on the house.

After the house fell into disrepair it was purchased by the French governmental agency Conservatoire du Littoral in the 1990s.

A team led by Claudia Devaux, Renaud Barrès, Burkhardt Rukschcio and Philippe Deliau carried out the restoration to recreate “as closely as possible to what had been imagined and accomplished by Eileen Gray”.

A major part of the restoration included extensively reinforcing and repairing the concrete structure, which had been damaged by the sea air. 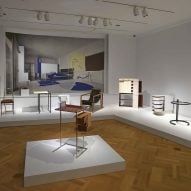 Along with repairing the building’s structure, the home’s in-built and freestanding furnishings were recreated by replicating the original materials and methods.

This included remaking a writing table from nickel-plated steel tubes, which was positioned in the home’s office. The work was carried out by Burkhardt Rukschcio and Renaud Barrès, based on a single photo held by the National Museum in Dublin.

Alongside E-1027, a seaside holiday cabin next door and five holiday homes designed by Le Corbusier have also reopened to the public.

From the outside the building looks like a log cabin, but inside it has a modular design made from prefabricated parts.

Le Corbusier stayed at the cabin every August until he died swimming at the beach below E-1027 in 1965 aged 77.

Irish architect and furniture designer Gray died in 1978. She was recently the subject of a retrospective in New York featuring work “never shown before”.

Photography is by Manuel Bougot.

Fitness Boxing Is Getting An Anime Series In Japan