A bulbous sculpture by architects Bjarke Ingels and Jakob Lange, an ornate temple and a walkway made of recycled ocean plastic were featured at the annual Burning Man festival in the Black Rock Desert of western Nevada.

Taking place on-site for the first time since the onset of the Covid-19 pandemic, during which it occurred online, Burning Man returned this year with a diverse array of installations.

The festival is perhaps best known for the effigy of a man that is burned on the final evening of the week-long event. 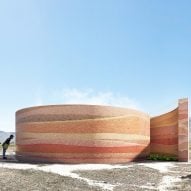 With an aim to leave no trace and function without official currency, participants gather at the collection of camps and art collectively referred to as Black Rock City and must bring in, construct and deconstruct the installations in the often-hostile desert conditions.

Each designer must plan for the installation and shipping of their materials because of the decentralised operations of the festival, which sees upwards of 70,000 attendees.

In 2022, many of the installations focused on reused materials, including a luminescent sculpture made from plastic recovered from the ocean. Many also took into account the need for shade in the desert, which festival-goers refer to as the “playa”.

Read on to see some of this year’s installations:

One thing that stays the same every year at Burning Man is the presence of a monumental temple made from wood that is also burned at the end of the festival.

Each year, the designer changes. This year, Colorado-based Laurence Renzo Verbeck designed an eight-pointed star that is oriented around a central gathering area.

Above the central gathering area, a gem-shaped core was filled with lights that at night illuminated the complex latticework that ran down the sides of the points.

Designer Steven Brummond opted to use recycled plywood for this 48-foot-tall bell tower. The panels were arrayed to resemble the appearance of fishbone or porcupine, according to the designer.

“This pattern filters light to make the tower glow from the inside out,” said Brummond.

Participants were able to climb up the tower to interact with a set of ropes connected to 99 bells installed at the heights of the structure.

The SKUM Thundercloud by Bjarke Ingels and Jakob Lange

Bjarke Ingels and Jakob Lange, partners at Danish architecture studio BIG, designed a globular installation for the festival. In Danish, skum means foam and the design was made out of an inflatable material similar to that used in the construction of hot air balloons.

During the day, the structure provided shade and at night, it was illuminated inside by “lightning strikes” that responded to external noise.

“When a sound – man-made or natural – occurs in the vicinity of SKUM, the lightning strikes cease – only starting back up once the quiet serenity returns,” said the designers.

Unbound by Jules and David Nelson-Gal

This romanesque structure in the desert was conceived by artists Jules and David Nelson-Gal as a “temple to human thought, altered by time, space and energy”.

Over 3,000 books were deconstructed and framed to create the library. Three internal rooms allowed participants to see the exposed ceiling of the structure.

Sconces, chandeliers made of book pages and tables were included inside.

Positioned deep in the desert away from the camps and not listed on the festival map, Titan was meant to reward those with a sense of adventure, according to the artist.

Two massive slabs of Zimbabwe black granite were installed, clocking in at a combined weight of 2,000 pounds (907 kilograms), and illuminated from below.

“This piece, along with my broader body of work, carefully considers the use of long-lasting materials, originating both long before, and continuing to last long after the existence of the human race,” said De Paula. “The granite in this work dates back 500 million years.”

The wooden roof was transversed by long sheets of fabric that provided shade, with the whole structure oriented towards a central point.

“This infinite space has seven gateways elevating to the sky and getting increasingly intricate and intimate, forming a dream-like set of galleries and performing spaces for everyone to use and place art of all kind,” said Mamou-Mani.

Before being installed at the festival, the initial design was opened digitally through a metaverse installation, which people could visit during Dezeen’s Virtual Design Festival.

Architect John Marx and artist J Abinthia Vermut designed an open-air art gallery called the Museum of No Spectators that is meant to challenge what the designers perceive as the “elitist” nature of galleries.

Constructed with a steel frame supporting aluminium panels, the gallery allowed participants to take and leave art on the walls as they pleased.

Designed with elements of ancient Egyptian and Nubian mythology in mind, Solar Shrine featured a columned temple fronted by a massive vertical “gateway”.

Made from lumber wrapped in plywood, the structure featured a series of fire elements that shot flames into the air.

“The height of the art installation elements, starting with the tall gateway, symbolizes the power of the Sun as it rises in the east with gradually decreasing sized structures in the west representing the waning of its power,” said the artists.

The Last Ocean by Jen Lewin

Artist Jen Lewin created an installation with interactive tiles and a sculpture of a polar bear, all made from plastics gathered from the ocean.

The shape of the floor plates was based on the pentagonal tiling developed by mathematician Marjorie Rice.

During the process, Lewin came up against the lack of manufacturers working with recycled ocean plastics in the United States and ended up commissioning South African firm Ocean Plastic Technologies for the fabrication.

Sourced completely from salvage, Paradisium was designed to represent a “comprehensive forest ecosystem” in the middle of the desert.

The designers created a series of trees with graphic elements on the side. The tallest four served as perches for the participants, while small pods were included to provide further shade.

“Paradisium is a grove made out of trees, long fallen, that reminds us of the forest’s beauty and our interconnectedness and interdependence with nature, while also fostering a sense of community and an investment in our shared future,” said the team.

The 2022 Effigy by Aaron Muszalski

Each year, a different designer takes on the centrepiece for the festival’s “Man”, a sculptural human form that is burnt on the last day of the festival.

Using a dream sequence from Chinese literature as an inspiration to adhere to the theme of this year’s festival — waking dreams — Muszalski adorned the structure with symbols and placed it upon a temple-like pedestal.

Burning Man took place from Sunday, August 28 to Monday, September 5 in the Black Rock Desert of Nevada. See Dezeen Events Guide for an up-to-date list of architecture and design events taking place around the world