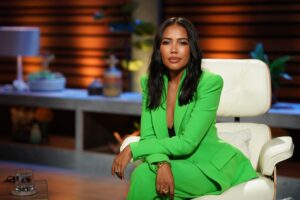 Emma Grede had no business background when she became an entrepreneur at the age of 26. But within 10 years, the London native went from a small business owner to the visionary behind Kim and Khloe Kardashian’s dominating apparel lines.

Grede made her inception into business after launching her marketing agency ITB Worldwide in 2008. She always had a love for fashion but knew nothing about the business side of the industry. So while attending the London College of Fashion, Grede sought to learn everything she could about planning, merchandising, and partnerships.

“I didn’t know anyone growing up who had their own business,” Grede told CNBC Make It. “So I really didn’t know what I was getting into.”

But through her early work positions in fashion, Grede knew there were a ton of opportunities available that were hers for the taking.

“I had been around a lot of people, seeing clients and deals. I just imagined, ‘Well, if they can do it, why can’t I?” she recalled.

Just three years ago, Grede sold her marketing agency for an undisclosed amount. She relocated to Los Angles and launched clothing lines with two members of the Kardashian empire, a denim company with Khloe, and a shapewear collection with Kim.

Most recently, Grede became the first Black woman investor to appear on Shark Tank. Diversity and inclusion are something Grede believes come naturally whenever a company has a Black person steering the ship.

“I never set out to create a company that was rooted in principles of diversity,” Grede told Bustle. “That’s just what happens when a Black woman is at the helm of a company. Decisions are made with this viewpoint that I grew up [with].”

I actually look for those opportunities in my life, where can I learn or put myself into situations where I’m a little bit unfamiliar,” Grede, who relocated to Los Angeles from London in 2017, told CNBC. “Because actually, I think that is what helps me to grow.”

Dr. Cornel West Teaches Us How to Think Like a Philosopher