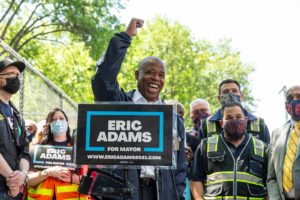 Adams, who will take over for current Mayor Bill de Blasio Jan 1, received 66% of the vote Tuesday to become the 110th mayor in the city’s history. The former cop and center-left Democrats win signals a new leadership that Adams said will reflect the needs of working and middle class residents of color, who were vital to his win.

However, the former Brooklyn Borough President has his work cut out for him. New York City is still dealing with the COVID-19 pandemic, an unequal recovery, concerns about crime and gun violence, police reform and an unequal education system. In addition, progressive Democrats made gains in the city council, meaning Adams will have to work with a group that sits much further left than he does.

One positive for Adams is Governor Kathy Hochul, who replaced Andrew Cuomo after he resigned, attended Adams’ victory party and  wants to have a better relationship with Adams than Cuomo had with de Blasio.

“We are so divided right now and we’re missing the beauty of our diversity,”  Adams said according to the New York Times. “Today we take off the intramural jersey and we put on one jersey: Team New York.”

“Understand this, unlike a former president who said many, many years ago, ‘you won’t have me to kick around anymore’ — you will have Curtis Sliwa to kick around,” the Republican mayoral nominee said according to the New York Post. “I proved to everyone that I could go into neighborhoods where the only Republican they ever saw was Abraham Lincoln on a $5 bill — and be accepted, received and given equal treatment,” he continued. “We have to carry this movement on.”

Adams is aware of the difficulties facing him and the city, saying during his victory speech “We are fighting Covid, crime and economic devastation all at once.”

Adams will be the city’s first Black mayor since 1990 when the late David Dinkins was elected.