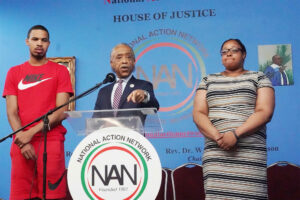 “Hawk Newsome threatening to burn down our city in response to Mayor-Elect Eric Adams’s proposal of bringing back the anti-crime unit in plain clothes is an insult to injury to my family and the movement at large,” Garner said. “On behalf of the entire movement, I must ask you to retract your statement and redirect that righteous anger to help all of us form a more constructive way of accomplishing our goals because, at the end of the day, we all we got.

“I will not let you or anyone else jeopardize our progress.”

Newsome did not respond to Garner, but did tell the Post “God bless him and his fight for justice for his father.”

Adams has been adamant about reinstating plainclothes cops in an effort to curb gun violence and make the city safe for its tourism industry which has suffered due to the COVID-19 pandemic.

Newsome and the New York BLM chapter protested the move outside of Adams’ office, believing it will bring the city back to the days of Stop and Frisk when Black residents were overwhelmingly targeted by cops under the Bloomberg Administration.

Garner Jr’s father, Eric Garner Sr,  was choked to death by NYPD officer Daniel Pantaleo in 2014 after police confronted Garner on suspicion of selling single cigarettes from packs without tax stamps. Garner’s screams of “I can’t breathe,” became a mantra for BLM leaders and protesters.