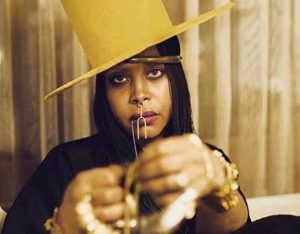 Erykah Badu was the only high-profile celebrity who shared a behind-the-scenes video from inside Barack Obama’s 60th birthday party.

The “Phone Down” singer couldn’t even follow her own lyrics while attending Obama’s birthday celebration at Martha’s Vineyard last weekend. Badu posted a video from the event that showed Obama and H.E.R. cutting up on the dance floor.

Badu appeared so into the vibe, she recorded them without their knowledge and posted the video on social media. The since-deleted post was picked up by the media and made its rounds online.

Erykah Badu and H.E.R. turning up with Barack Obama at his 60th birthday bash. pic.twitter.com/cPfBU167PT

After checking herself, Badu took to Twitter to apologize to the Obamas for pulling a new-age move when out with a mature crowd.

“Mr. And Mrs. Obama, Please forgive me 4 being the “terrible guest “ at such a sacred event for your family,” Badu said in a heartfelt tweet. “I was so inconsiderate, Thank you for all your love. What an example of ‘how NOT ‘ to be …… erica”

Mr. And Mrs. Obama , Please forgive me 4 being the “terrible guest “ at such a sacred event for your family. I was so inconsiderate, Thank you for all your love. What an example of ‘how NOT ‘ to be …… erica

Badu’s apology comes after Obama faced criticism from right-wing pundits who blasted him for throwing a party during the COVID-19 Delta variant spike. Amid the backlash, the NY Times released a report claiming that most birthday party guests were “mostly vaccinated” and all “had to submit negative tests to gain entry to the property.”

How to Avoid Going Broke in 5 Steps