Last year, Visual Concepts’ NBA 2K series saw a season of highs and lows, as it made the move to new-gen hardware and tried to keep last-gen users happy. For NBA 2K22, the mission hasn’t changed: a new-gen and current-gen version are both in development with new features to keep players on both hardware invested. “We have two unique experiences again this year,” says executive producer Erick Boenisch. “We made two brand-new games again. That’s something that I feel really solid about. It worked really well for us last year; our fans resonated with the different experiences they could play. “

After revealing the main cover athlete Luka Dončić among other special covers, Visual Concepts is finally pulling back the curtain on what to expect from NBA 2K22, providing information drops through Courtside Reports. In addition, we attended a presentation from the Visual Concepts team, where it dished more on new features and answered a few questions. Here’s what we know so far.

Visual Concepts is promising more impactful changes on both sides of the game, although the details are still light on what this will entail. Offensively, the goal is to give players more control over how they score. Basketball IQ and stick skills will play a bigger role in your success, and you can expect precision jump shooting, dunking in traffic, and pulling off alley-oops to be more skill-based alongside new signature moves and combos to break down defenders off the dribble.  Gameplay director Mike Wang said, “If you don’t make the right play, then that’s going to be on you.”

Defensively, a revamped shot contest, stealing, and blocking system bring more realism to the game. Elite defenders should make much more of an impact, being able to play suffocating defense on the perimeter. “All the things you do in the game, they’re a lot more skill-based,” Wang says. “What you come away with is an experience that just feels a lot more rewarding.”

A trailer coming later in August will show off the gameplay improvements in action. 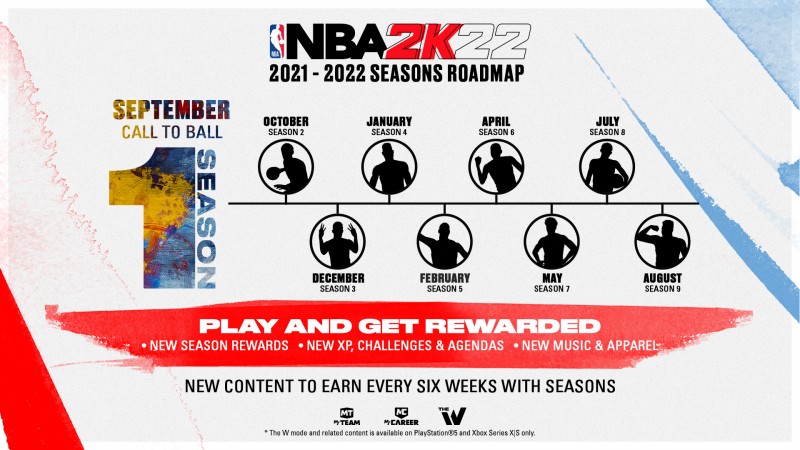 Seasons are back, and they’re expanding. They are going game-wide and will be making their way into other modes beyond MyTeam. Visual Concepts says to expect more content, rewards, and more ways to play. “It’s free for all NBA 2K22 gamers; there’s no pay, no battle pass, this is all free content,” Boenisch confirms. “It’s going to be playable in MyTeam on both gens, it’s gonna be playable on MyCareer mode on both gens. And also on The W on the next-gen consoles. This brings more constant more rewards, more ways to play for gamers all year long. ”

Seasons run every six weeks, providing new content and rewards each time. Every mode will offer different rewards and ways to claim them during the season. For instance, in MyCareer, you have the chance to gain new apparel and banners for your MyPlayer. Each season will hold its own Grand Prize to chase. In MyCareer Season 1, the Grand Prize is go-karts to use in either the Neighborhood or City. This will let you reach unexplored regions, but you need to reach level 40 to obtain this prize. If you don’t quite get there, you can redeem inline skates at level 30.  If you reach level 40 in four different seasons, you then earn “Legend” status.

As for MyTeam, you earn XP with new and familiar Agendas, while also earning new rewards from Season and Lifetime Agenda Groups. You can reach level 40 in every MyTeam mode, such as Domination, Triple Thtreat, Limited, Unlimited, Draft, etc. The top prize of Season 1? Pink Diamond Carmelo Anthony!  A new fast-paced mode is also set to come this holiday.

The W is also getting some love with Seasons. Going head-to-head with other My Players online will grant you new rewards, such as VC, clothing bundles, badges, nail polish, and more.

And as a bonus, you’ll have some new music as you work for your rewards each season. “First Fridays” will add new songs to the game’s soundtrack every Friday throughout the season, and Visuals Concepts has inked some big partnerships with musical labels, such as Columbia Records, Def Jam Recordings, Low Profile/Casual Records, Ninja Tune, and Warner Records to get the job done and offer music from both up-and-coming artists and big-names.

To learn more about Seasons, check out the Courtside Report here.

MyTeam fans will also be happy to know one much-requested feature is finally making a return: drafting. “The MyTeam draft mode will have you select an entire lineup,” says MyTeam producer John Smith. “And it’s going to have a constantly updated pool of players, because as everyone knows, with My Team, that roster and the players that we put out all year long, evolve very much from Season One to Season Two to Season Three and beyond. This is an online mode. And the rewards that you get with your drafted team are for your permanent MyTeam collection.”

Smith did tease to expect another new mode outside of drafting to come around this holiday season. And before you ask, yes, just like in 2K21, all your progress will carry over across console generations, so if you do upgrade, you won’t lose all your progress.

Last year, new-gen players were introduced to The City and current-gen players had The 2K Beach. The former is getting some much-needed improvements, while the latter get to take to the waters and compete in a community aboard a cruise ship. The cruise ship will dock at exotic destinations throughout each season, with special shoreside events to keep things interesting.  Season 1 takes the cruise ship to the Carribean

The City has a new layout this year, and Visual Concepts said it made the experience much more lively and interactive, with more NPCs populating the city to make it feel alive. A new quest system is promising more creative content, while also providing new ways to level up and earn rewards. Visual Concepts says it will go into specifics at a later date.

Matchmaking options for The City should give players quicker alternatives for getting into games, with special buildings designated for this feature. Visual Concepts also said these types of sessions will be available for a number of game types and contribute to all MyPlayer progress.

Some other confirmations we received: Affiliations still exist and Visual Concepts said they’ll “be bigger than ever.” You also won’t have to spend games grinding in Rookieville to access The City, as Boenisch confirmed that’s a thing of the past.  “Rookieville was a good experiment for us,” he said. “I enjoyed it for what it was. But at the end of the day, I didn’t feel it added to the game what we set out for it. So there is no Rookieville in 2K22; you start as a fresh-faced kid in The City.”

Visual Concepts said to expect more information in September on both The City and Cruise Ship Neighborhoods. 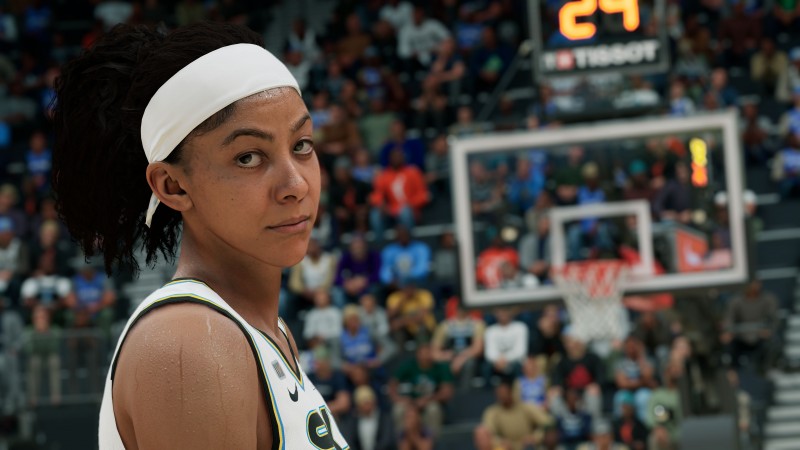 MyCareer Is Getting Reenvisioned For New-Gen

A traditional career mode will hit current-gen versions, but Visual Concepts is merging MyCareer with The City for new-gen versions, so your growing career will be reflected in this venue. As your player makes a name for themselves, they can pursue side ventures here, such as entering the fashion world or getting involved in the hip-hop business. You will also watch your home base grow with your ambition and success right in The City.

“What we’re doing this year is [we] really tore down the wall between The City and MyCareer; they’re one,” Boenisch explains. “Your MyCareer takes place in The City. You’ll be using the [new] questing engine we made as part of the MyCareer experience. Your house, [it’s] going to start off really simple, and as you kind of play along in your career, your house becomes bigger and bigger until you get the penthouse in the sky. But the whole point is, you’re living in The City with tons of other people who are on their careers as well. You’re just interacting with all of these people, pushing along your objective. “

When asked if we would get an authored, cinematic story like the past, Boenisch had this to say: “The story of MyCareer is it’s the narrative of you – the MyPlayer that you create and your journey, from wherever we start you to ultimately where you want to end up. That’s different for many people. That’s an NBA champion, or that is making it to the NBA, or that is making it to the Hall of Fame. There’s so many ways you can choose. But without giving too much away because I do want to talk about this a lot later, that tearing down the wall of MyCareer and The City is you will have these interactions, these cinematics, if you want to call it that, in real-time in The City. As you are going about your story, you’re going to visit your agent’s house, you’re going to the Nike facility to have your negotiations in the environment there. You’re moving about your career in The City alongside many, many other players doing the same.”

More will be revealed in September about exactly what the storyline entails and how much freedom you have within it.

While Visual Concepts wouldn’t elaborate just yet what it has planned, it said to expect the road to building a winning franchise to involve a bigger focus on the staff behind the players. Staffing is going to be just as integral as signing star players to bolster your roster. This includes scouting, training, and coaching. We can expect more details in early September.

A global launch is set for September 10 on all platforms (PS5, Xbox Series X/S, PS4, Xbox One, Switch, and PC). You can check out all the different editions and what’s in them here.

We will be updating this story as more info is revealed, so you can keep track of it all in one place.