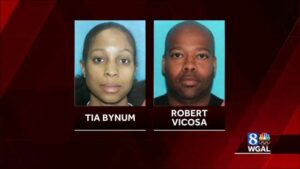 A former police officer in Baltimore, Maryland, who kidnapped his two daughters earlier this week has been found dead with gunshot wounds in a car that had been crashed.

Vicosa and the other victims were found dead inside of a sport-utility vehicle in Smithsburg, Maryland. They were discovered after police pursued them on a four-day crime spree that unfolded across state lines.

Governor Larry Hogan announced via Twitter that there will be an investigation into the tragedy.

We are grieving tonight over the unfathomable loss of two innocent children in what is clearly a horrific tragedy and heinous crime.

Maryland State Police have begun what will be a thorough investigation into today’s events.

According to WGAL, York Area Regional police said that U.S. marshals were looking for Vicosa’s vehicle but lost sight of it. That’s when state and local police saw the car and tried to make a traffic stop.

“That vehicle failed to yield and began to drive erratically. During that erratic driving, the vehicle eventually drifted off the roadway and came to a stop. The Maryland State Police arrived and assisted the other agencies on scene and approached the vehicle. Upon approach of the vehicle, they found multiple fatalities inside the vehicle,” Chief Timothy Damon said.

The man, woman, and one child were pronounced dead at the scene of the crash. A second child was taken to Meritus Medical Center in Hagerstown, where she was pronounced dead. Vicosa had been on the run since Monday after it was alleged that he attacked his estranged wife at the family’s Pennsylvania home. He took her captive and left with the two girls.