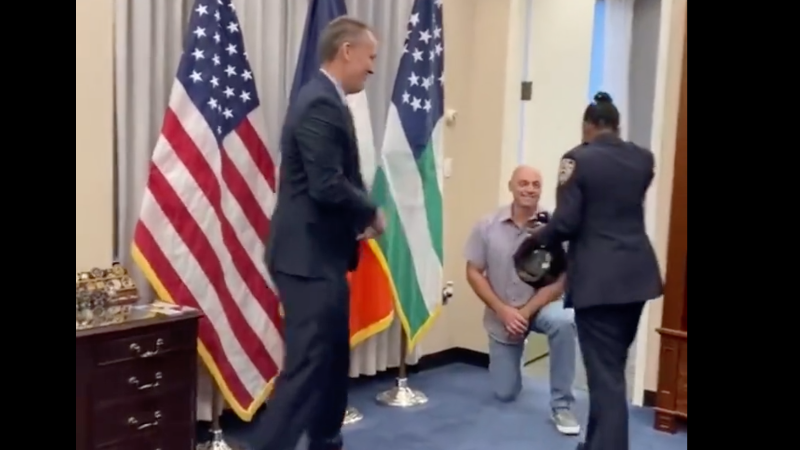 
An NYPD officer who thought she was receiving an award after she was summoned to the police commissioner‘s office was shocked when she didn’t receive an award but instead was surprised with a marriage proposal.

A Tweet sent out by New York Police Department Police Commissioner Dermot F. Shea showed a video clip of the young woman coming to accept the award and her boyfriend popping the question.

When you think you’re going to the PC’s office to receive an award, but you leave with a diamond ring & calling your retired-sergeant-boyfriend — your “fiancée!”

Join us in congratulating Shaundel & Henry — we’re wishing them both the very best! pic.twitter.com/SnUAwtszvl

The police officer who received the surprise was NYPD Officer Shaundel Seymour. Her boyfriend and now fiancé is retired NYPD Sergeant Henry Chernyavsky.

Seymour, who works in the Licensing Division and retired sergeant Chernyavsky spoke to People about what took place and how it impacts what people think about the police force.

“We have gotten such great love and support from everyone. They are happy to see a love story involving the NYPD,” the couple stated. “We don’t often get to see a softer side of the NYPD showing that we love and want to be loved just like anyone else.”

The couple told the outlet that they met at a work-related event more than five years ago, and they were immediately attracted to one another. Chernyavsky said he was intrigued by Seymour’s beauty, while Seymour loved Chernyavsky’s personality.

The couple was dating happily for several years until Chernyavsky felt he was ready to take that next leap in their relationship.

“One of my main goals was to surprise her, so I hadn’t told anyone besides the people that were a part of it,” Chernyavsky. “I am grateful that Police Commissioner Shea was able to help me propose to the love of my life.”