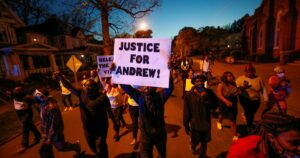 An amended lawsuit filed by the family of Andrew Brown Jr. alleges one of the officers who shot Brown told investigators he altered his gun after the shooting and before it was seized.

In April, Brown Jr., 42, was shot and killed by Pasquotank County deputies in North Carolina as they attempted to serve a warrant for his arrest. District Attorney Andrew Womble announced the officers were justified in the shooting in May, adding Brown drove toward the officers while trying to escape.

However, the lawsuit alleges Pasquotank County Sheriff’s Investigator Daniel Meads told the North Carolina State Bureau of Investigation (SBI) in an interview he “altered the gun he used to shoot at Brown’s vehicle while he was in a dark room inside Brown’s house and before his weapon was confiscated as evidence.”

According to the amended lawsuit, Meads left out that he removed his magazine inside the victim’s house when he was first interviewed and only told investigators after the gun was seen on another officer’s bodycam footage.

Additionally, the lawsuit states a detective who was at the scene told SBI investigators Meads asked him to shine a flashlight on him in Brown’s house so he could count the remaining rounds in his weapon before handing it in. The suit adds Meads was nervous about how many times he fired his weapon at Brown’s vehicle.

Harry Daniels, an attorney for the Brown estate, said the suit was amended to include specific allegations against the officers because more detailed information came to light after the attorney’s for the victim’s family gained access to SBI files.

The lawsuit also claims the warrant for Brown was unlawful because a judge did not sign it.