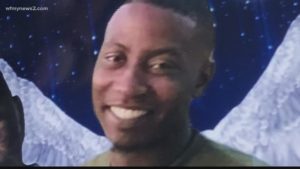 The family of the 18-year-old Black male who was fatally shot while attending a funeral last November has launched a lawsuit against the sheriff’s department.

On Wednesday, civil rights attorney Benjamin Crump joined with the family of Frederick Cox to issue out a lawsuit against the Davidson County Sheriff’s Department, WFMY reports.

Crump said Detective Michael Shane Hill’s deadly use of force was “not justified under any circumstances.” Hill was in plain clothes when he shot and killed Cox at Living Water Baptist Church on Nov. 8, 2020.

Cox was attending a funeral when shots rang out outside the ceremony. Investigators say at least 70 shots were fired with deputies shooting Cox.

Family members say Cox was trying to shield the funeral guests by ushering them back inside the building when Hill fatally shot him. But the Guilford County District Attorney said no charges would be filed against Hill.

“Fred held the door to make sure others got out of harm’s way and he took the bullets,” Crump said in January. “He’s a hero, you can’t kill a hero.”

An autopsy report said the deputy “observed Cox with a handgun at the time {the deputy} discharged his weapon and other witnesses observed a handgun near Cox after he was shot.” The report also noted that Cox was shot four times and never fired his weapon.

“He’s waiting on Fred. Fred is not coming. Even during the protest, he called me crying.”

Cox was a father of two infants, a 1-month-old and a 9-month-old.