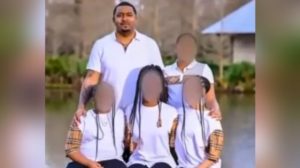 A father in Louisiana lost his life in a shootout after confronting a teenager who climbed through his window to visit his teenage daughter.

Dezmon Hamilton, 34, was killed on Sunday morning after suffering multiple gunshot wounds, WBRZ reports. The suspect, identified as 17-year-old Nicholas Mcquirter, was also wounded in the gunfire and was taken to a hospital.

The incident was initially listed as a home invasion but changed after authorities realized the teen was there to visit Hamilton’s 14-year-old daughter. Officers believe Mcquirter used a ladder to climb up to the family’s second-story window.

After Hamilton realized Mcquirter was inside his home, he confronted the teen and a shootout ensued. The two both shot at each other during the encounter, police said.

“The daughter’s mother and grandmother came over to discuss what was going on. The grandmother and her daughter took the 14-year-old off to the side and were talking to her. An argument ensued and then gunshots were fired,” Zachary Police Chief David McDavid said, as captured by Louisiana Radio Network.

It’s still unclear who fired the first shot. But the teen is now facing charges of second-degree murder, illegal use of a weapon, and illegal possession of a stolen firearm. McDavid said the shooting comes amid an increase in juvenile crime in the area.

“There are gangs here, there are gangs around Zachary, on the outskirts,” McDavid said. “They’re coming here we know that. We track them, we arrest them. But they’re using a lot of these juveniles to do their dirty work, and that’s what’s happening and they’re stealing guns and doing drugs.”

McDavid is calling on the parents to intervene and get their kids to curb all of the street violence.

“It boils down to these young juveniles who a lot of them are around here stealing guns or carrying stolen guns, concealed. It’s like they don’t know how to deal with conflict resolution,” McDavid said.