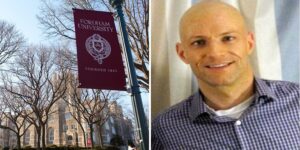 A Fordham University professor received an email from two Black students after he confused them for each other as they arrived to class late on Sept. 24. His reaction to the email has left him out of a job.

According to the school’s newspaper, the Fordham Observer, lecturer Christopher Trogan responded to the email by sending a mass message to both sections of his Composition II class. In the response, he wrote off the misnaming incident as “a simple, human, error” having “nothing to do with race” and detailed his history of allyship to people of color.

“It seemed a little excessive, like all you needed to do was say sorry and it would have been fine,” said Chantel Sims one of the two students involved. “We were not actually that upset about him mixing up our names. It was more so the random things he would throw into the response.”

She added that she found the section of the email dedicated to “everything he has done for minorities” particularly off-putting.

The other student involved, who asked to remain anonymous, said that this was not the first time they’d had such an interaction with Trogan, who had taught the student in four separate classes.

“I felt really disrespected,” the freshman said. “I did not feel heard because every time he (misnamed me) I would tell him, and it just seemed like he would brush it off or that he did not care.”

Two days after the incident that prompted the email, Trogan was placed on suspension and asked not to have any further communication with his students. Following an Oct. 5 Zoom meeting with Eva Badowska, dean of the faculty of arts and sciences and associate vice president, arts and sciences, Trogan was officially terminated on Oct. 24.

He says that in his termination letter, Badowska did not focus on the fact that he had confused the students’ names, but rather on the email that he sent to his two classes.

In response to his firing, Trogan sent a nine-page email to 80 former students detailing the events that led to his termination and the immediate impact on his life.

“Their team of lawyers may now even come after me — even after my termination — with threats and charges against me personally and professionally for sending this to you, but I will deal with those when they come,” he wrote.

Trogan has since received a letter from Fordham’s associate vice president of Public Safety asking him not to come onto university property, and reminding him that, as he is no longer part of the school’s faculty, he should refrain from contacting students.