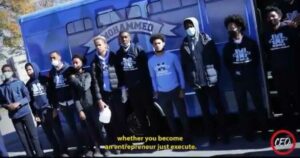 After a small Islamic school in Atlanta struggled to get its basketball players to games, a group of five local Black business men gifted the school a new bus.

Farad Abdurrahman, a basketball coach at WD Mohammed in East Atlanta, told Atlanta Black Star that he’s been talking about the need for a bus for two years.

“We had to get to the games, so I used to have my assistant coaches packing up the cars, most times we were in cars, and a few times we took Uber and Lyft but most times we pack them up in my minivans and two other people’s cars, a couple of parents and we drive them all around, and we have to play everywhere, so these are long rides,” Abdurrahman said.

WD Mohammed is a K-12 school with around 120 students. The school’s basketball team is doing well, with some players showing potential for Division 1 college recruitment.

Gary Weems, an assistant coach at WD Mohammed, helped put the team’s transportation problem to rest when he reached out to philanthropist and entrepreneur Jason Lobdell, who then contacted other men in the “Circle of CEOs.”

“I called my brothers and said, ‘Look, there’s this school and they need help getting to their games,’ and so I thought, ‘What better way than to get them a bus,’” Lobdell said.

Abdurrahman spent a month searching before the new $27,000 bus was revealed with the team’s logo on the side. Weems said the players were “holding back the tears” in appreciation for the gift that will allow them to relax comfortably on long rides to games.

The bus is an example of charity, a pillar in the Islamic faith, Abdurrahman said.

“I’m constantly telling the kids, ‘Listen, it is your duty once you get older and become successful to give back to this community,’” he said,