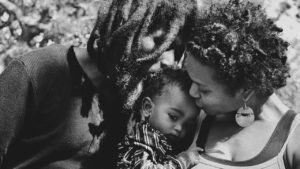 A former “American Idol” contestant had her youngest child taken away from her by authorities from the Manatee County Sheriff’s office earlier this week. The taking of the infant makes this the second child that has been taken from the woman.

The third-place finalist from “American Idol’s” seventh season, Syesha Mercado posted an Instagram Live video clip as the incident was unfolding down in Florida. The hour-long video was filmed and posted on her Instagram account.

“THEY TOOK OUR BABY AGAIN!”

According to The Herald-Tribune, earlier this week on Wednesday morning, Manatee County sheriff’s deputies surrounded a car that was occupied by Mercado, her 10-day-old baby girl, and the father of the child, Tyron Deener. The video clip shows a couple of police officers approaching the vehicle Mercado was riding in with her family. The police officers made them pull over and two of the deputies had given them a court order to turn over the newborn infant for a checkup at the hospital.

The couple expressed to the officers that they had taken the baby to the doctor the previous day.

A court hearing was held Thursday morning and the baby is currently still in protective custody, according to Donisha Prendergast, who is a founder of the organization We Have the Right to be Right.

The couple’s 15-month-old son has been placed into foster care over allegations of malnutrition. He was taken to Johns Hopkins All Children’s Hospital in St. Petersburg on Feb. 26 where he stayed until late March. When the boy was discharged, he was placed in foster care and the couple has been trying to get him back.

A GoFundMe account was set up previously to help in the fight to bring the son, Amen’Ra back to them.

According to the GoFundMe titled: “The Legalized Kidnapping of Black Babies Through CPS”:

“I am a Pregnant, breastfeeding, Mama who went to the hospital with the intention to get my sun, Amen’Ra, some fluids while transitioning from extended breastfeeding to being bottle-fed. On March 11th, our sun Amen’Ra was forcefully and legally kidnapped from us by CPS, who claim we refused a B12 shot that was a matter of life and death, which is an absolute lie. We never refused a B12 shot, and at no point was he on the verge of death. Our Sun has since been placed with a white foster family without interviewing qualified relatives or friends of our family for placement while they investigate. We are given limited information and presently only have weekly zoom visitation for an hour with our sun, with no court order stating these visitation limitations.”

We hope that this situation gets resolved fast.

Zelda: Skyward Sword HD Was July's Best-Selling Game In The US, Even Discounting Digital Sales