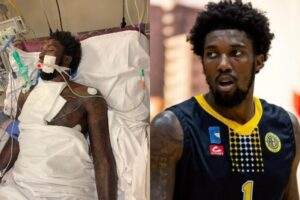 Former college basketball star Corey Manigault was recently released from the ICU after being brutally attacked outside a nightclub in Nicosia, Cyprus.

The 23-year-old University of Pittsburgh alum was celebrating a game win on the island located in the Mediterranean Sea when he was attacked outside of a nightclub and sustained serious injuries, WUSA9 reports. After suffering a brain hemorrhage and hematoma from the attack, Manigault spent the last two weeks in the hospital.

The former St. Paul VI basketball player has been playing overseas following his success in college basketball. Manigault has played in Bulgaria and Tunisia before playing for a team in Limassol.

But his mother, Sothia Green, endured a nightmare when she received a startling call late last month about her son being hospitalized.

“When I got there, I was not really able to talk to him because he was not alert,” Green said. “He was intubated and sedated.”

Manigault, his girlfriend, and teammate Brandon Averette were together when they were attacked, EuroHoops reports. Averette and Manigault’s girlfriend suffered cuts and abrasions but no serious injuries. Meanwhile, whatever happened to Manigault, left him in the Intensive Care Unit from Nov. 21 to Dec 1.

“I don’t know where he was going … I’m still unaware of the events of what happened,” Green said.

Averette and Manigault’s girlfriend told police that unknown assailants had attacked them. A 46-year-old was reportedly arrested for the alleged murder attempt, while two other suspects have been detained for their involvement in the assault.

Manigault can speak now after losing his ability, with doctors having no explanation why. His mother is trying to get him transferred to the States after noting unfair treatment by the medical staff overseas.

“They have him restrained to the bed … in soft restraints,” she said. “I have not seen him stand. They’re saying that he was standing … So I’m not quite sure of who to believe and what to believe.”