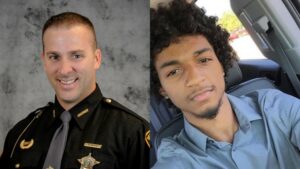 A former Ohio Sheriff’s deputy was charged with murder Thursday in the fatal shooting of Casey Goodson, 23, who was shot in the back five times as he entered his grandmother’s home.

Jason Meade, a 17-year veteran of the Franklin County Sheriff’s Office, was charged with two counts of murder and one count of reckless homicide. Additionally, an attorney for Goodson’s family announced a federal civil rights lawsuit against Meade and the sheriff’s office alleging excessive use of force and wrongful death.

Goodson’s mother, Tamala Payne, told reporters she was elated after “a year of grief and a year of pain,” she said in response to the charges. “I’m overwhelmed with joy. My emotions are everywhere. We did it y’all. We did it.”

According to ABC News, Meade turned himself in and plans to plead not guilty. Meade’s lawyer, Mark Collins, told ABC in a statement his client “acted within his lawful duties as an officer of the law when he pursued Mr. Goodson,” and Meade fired his weapon as he “feared for his life.”

The incident, which took place on Dec. 4, 2020, when Meade was wrapping up an unsuccessful search for a fugitive while working a U.S. Marshals Service Task Force, is still under investigation.

According to NPR, U.S. Marshal Peter Tobin said Meade confronted Goodson, who was not the subject of the search after he drove by Meade and waved a gun at Meade.

However, Tobin has since retracted that statement saying it was based on “insufficient information” and added that Meade was not performing a task for the Marshals at the time of the shooting.

What happened between Meade and Goodson remains largely unknown, and no body camera or dash cam footage was taken. Goodson’s relatives said at a news conference Thursday he was carrying a sandwich in his hand and added if he was carrying a gun, he had a license to do so.

In March, the Franklin County Coroner determined Goodson was shot five times in the back.