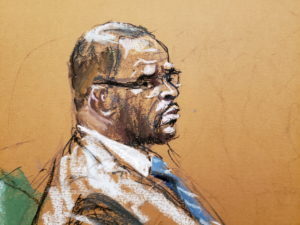 Another day of R. Kelly’s sex trafficking trial has brought forth more shocking and disturbing revelations into how the disgraced singer allegedly treated his brood of girlfriends.

One former employee of Kelly testified Tuesday that the singer/songwriter once forced his girlfriends to fight each other as punishment for their alleged misbehavior during a wild “twerkfest” birthday party in January 2016, NY Daily News reports.

Suzette Mayweather, Kelly’s former assistant, took the stand at Brooklyn Federal Court and said the women had “twerked for cake” to get a slice of dessert.

“He had to have them get on each other. I think they were fighting,” Mayweather recalled.

While she didn’t see the fight with her own eyes, she heard screaming, thumping, and laughing from the upstairs studio. Kelly reportedly had the women fight after he became upset by them allegedly twerking for cake.

“He didn’t like an incident where they were twerking for cake,” Mayweather said.

She recalled another incident when she upset the singer after speaking to one of his girlfriends about her relationship with the singer.

Mayweather worked for the singer for years and recalled his girlfriends being forced to stay in their rooms for long periods of time. She remembers the women having to ask for permission to use the bathroom, eat, or leave the tour bus.

Mayweather’s testimony came one day after another witness testified that R. Kelly surprised one visitor with a nude young woman who came out from under a boxing ring at the snap of the singer’s fingers, NY Post reports.

Kelly is accused of running an elaborate underground sex trafficking ring. He allegedly targeted young women and girls at his concerts and subjected them to abuse and mistreatment after they started living with him.