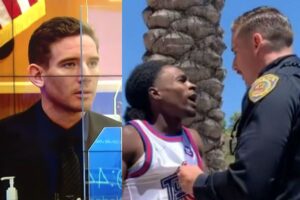 A former San Diego cop was acquitted Friday of lying on his police report about pushing a Black man during an arrest.

Matthew Dages showed relief after the jury returned with a not guilty verdict following three days of deliberations, Yahoo News reports. Dages was cleared on one count of providing false testimony.

The charges stemmed from Dages’ May 27, 2020, arrest of 24-year-old Amaurie Johnson. In the police report, Dages claimed Johnson balled up his fists and took a fighting stance when he stopped him for smoking on a trolley platform.

However, an eyewitness video showed Dages grabbing and pushing Johnson onto a concrete bench. After being taken into custody on accusations of resisting arrest, Johnson was never charged with a crime and was not cited for smoking.

The arrest sparked protests and backlash in the area around racial profiling and police bias issues. With Johnson’s arrest coming two days after the murder of George Floyd, tension around racial injustice was high. The La Mesa Police Department terminated Dages. He is fighting to get his job back, the San Diego Union-Tribune reports.

During the trial, Johnson denied Dages claims of physically assaulting him. Johnson testified that he was not smoking and admitted to swatting the officer’s hand away but said he did not ball his fists or take a fighting stance.

“The progressive DA is choosing criminals over cops,” Sullivan said through a text.

But, Yusef Miller of the Racial Justice Coalition acknowledged how people of color are often targeted and profiled by the police.

“It’s obvious that this man (Johnson) — innocent of any crime, any violation — was targeted, and that’s what started this thing snowballing out of control,” Miller said.